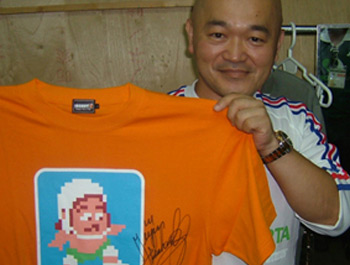 Hudson Soft mascot-cum-executive Toshiyuki Takahashi, a man whose inhumanly fast button pressing skills have earned him a spot amongst gaming’s living legends, has announced plans to leave the publisher at the end of the month.

Takahashi has offered no official statement on why he has chosen to leave Hudson Soft after nearly three decades of loyal service, though Gamespot cites a recent Japanese-language blog entry which claimed that Takahashi is working with devoted gamer and gravure idol Haruna Anno on an unnamed venture. Likewise, the new project lacks concrete details, though that same blog entry may offer some evidence as to its direction. Specifically, that Anno is “a fan of Takahashi and retro games.”

For those of you still puzzled as to how you should know Takahashi, I offer the following clip of his aforementioned skills:

Takahashi is able to tap a button 16 times in a single second, a rate faster than the auto-fire on all but the most elite specialty controllers. In fact, Takahashi is so fast that many standard controllers are unable to register his button presses.

During the 1980s, Takahashi’s incredible talent came to the attention of Hudson Soft. At that time the publisher was earning critical acclaim for Star Soldier, a classic NES-era shooter. Takahashi’s unique ability allowed him to fire so rapidly that the game (a title widely seen as especially difficult, even among hardcore shooter fans) was rendered trivial. Seeing an opportunity, Hudson utilized Takahashi to promote the title with his amazing skill, and from there he climbed the ranks of the Hudson Soft hierarchy, eventually landing a spot as an executive, as well the human, public face of the company.

So beloved is Takahashi in fact, that in 1986, he was given a starring role in Hudson Soft’s Takahashi Meijin no Bōken Jima.