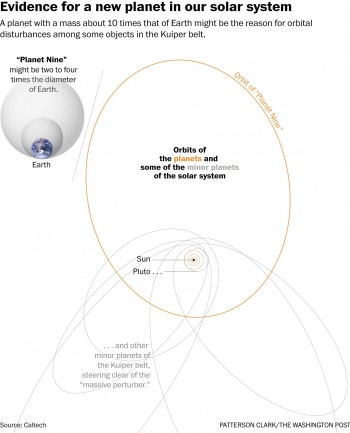 Astronomers have found new evidence to suggest a undiscovered planet larger than Earth is in our solar system.

Planet or not, Pluto is usually considered the boundary of our solar system before one moves into open space. That doesn’t mean nothing’s there, simply that we shouldn’t find worlds the size of Earth. But apparently we haven’t accounted for “Planet Nine”, an icy world creeping along well beyond Pluto. And while we can’t see it, we’re pretty sure it’s huge – roughly five to ten times larger than Earth.

So why haven’t we noticed Planet Nine before? Apparently it’s so far away from the Sun’s light that we haven’t been able to observe it directly. Yet according to research published in the Astronomical Journal, the motion of nearby dwarf planets and objects implies it’s out there, throwing everything off with its massive gravity.

Not that Planet Nine would be the solar system’s biggest planet – current figures suggest it would be fifth, after Jupiter, Saturn, Uranus, and Neptune. In fact, astronomers have theorized Planet Nine used to be closer to the Sun, but was thrown into a more distant orbit by the gravity of Jupiter or Saturn. Today, Planet Nine’s orbit is 20 times farther away than Neptune is to Earth. Its closest approach to the Sun occurs once every 10,000 years, and even then stays farther away than other known planets.

The most hilarious detail to me, however, was that this Astronomical Journal study set out to disprove the notion of another planet. What the authors found was more evidence that seemed to confirm a single planetary body was the cause of this gravity. “We thought [the] idea was crazy,” astronomer Michael Brown said of a 2014 paper on the subject. “Until then, we didn’t really believe our results ourselves. It just didn’t make sense to us … That was the real jaw-dropping moment, when it went from a cute little idea to something that might be for real.”

By the way, this is the same Michael Brown infamous for removing Pluto’s status as a planet. So it only feels natural that he may have identified an even larger body within our solar system. Meanwhile, telescopes are scouring the skies for visual confirmation of its existence. Hopefully we’ll be able to learn more details of our distant neighbor soon.