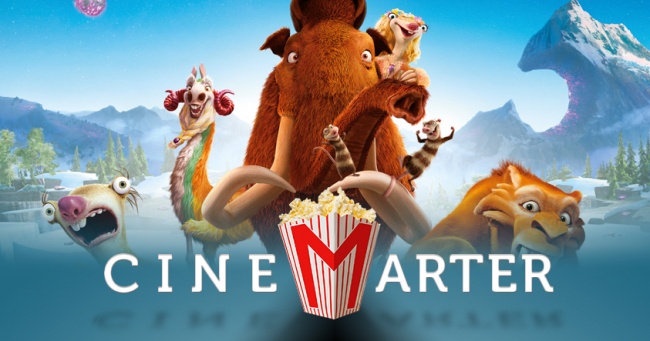 Ever since the first Ice Age film, during which the characters walked by a spaceship enclosed in ice, you know that the series would eventually get to this point. Well, kind of. Personally, I always thought aliens would actively get involved in trying to ruin the lives of our heroes. Ice Age: Collision Course, instead, decides to let Scrat, who is basically the worst, effectively destroy the entire universe – all because of his desire to bury his acorn. He finds himself in a spaceship, then in outer space, then bumping into planets like they’re bocce balls, and eventually sending a deadly asteroid right at Earth.

On our wonderful planet, our protagonists are dealing with their own issues. Manny (voice of Ray Romano) and his wife, Ellie (Queen Latifah), are seeing their daughter, Peaches (Keke Palmer) thinking about going off to roam with her husband-to-be, Julian (Adam DeVine). This especially bugs Manny, who goes all daddy-knows-best on both of them for the majority of the film. Diego (Denis Leary) and his wife, Shira (Jennifer Lopez), want kids but think they’re too scary for them. And Sid (John Leguizamo) is lonely – because he’s disgusting. If you’re unfamiliar with the franchise, you might be unaware that these characters are all various animals, many of whom are extinct in the modern era. Manny, Ellie, Peaches, and Julian are woolly mammoths, for example.

The giant asteroid – along with accompanying meteor showers – forces “The Herd,” as they like to be called, to journey to a previous crash site in order to try to figure out a way to divert the asteroid away from the planet. They’re led by Buck (Simon Pegg), returning from the third film, who comes from the land of dinosaurs. He’s also chased by three flying dinos (Nick Offerman, Stephanie Beatriz, and Max Greenfield) because he stopped them from stealing and eating an egg.

It’s a pretty simple setup that’s only made complicated because of the copious amount of characters. “Go here. Work out problems on the way. Countdown clock prevents lagging.” These things have all basically been the same, just with different scenarios. Last time, it was pirates. Before that, dinosaurs. Characters have minimal growth, stakes are relatively low – even if they’re as seemingly large as “end of the world” – and the jokes have been decreasing in frequency for a while now. The law of diminishing returns has rendered Ice Age almost worthless for viewers at this point. However, especially overseas, they make boatloads of money. Of course we’re going to keep getting them!

Ice Age: Collision Course is the worst Ice Age movie we’ve seen so far, and that’s saying something considering how bad some of the sequels have been.

They don’t cost much to make, either, which might explain why the animation quality hasn’t improved much since the second one – a full decade ago. This is a cheap-looking animated movie, only saved from being the worst of the year by Norm of the North still technically being a movie. The voice actors all seem bored at this point, with Romano and Leary especially phoning it in. Even the new additions can’t breathe any life into the franchise. And can we please kill off the characters played by Seann William Scott and Josh Peck? Their shtick was funny for maybe a minute.

There is a singular good scene in Ice Age: Collision Course. It’s the one where buck steals back an egg from the villainous dinosaurs, taunting them while he does it. It’s clever, exciting, and showcases what these filmmakers can do when they actually care about what they’re doing. The rest of the film is more of the same garbage we got tired of after the original. This series has rarely been good, but the first one had promise and wasn’t even bad. It’s taken such a steep dive since then.

Ice Age: Collision Course is the worst Ice Age movie we’ve seen so far, and that’s saying something considering how bad some of the sequels have been. It’s doing the same dance it’s always done, refusing to evolve or improve, because the filmmakers know they’ll make their money regardless of its quality. The voice actors phone it in, the animators don’t care, the writers are giving us more of the same, and there’s almost nothing here to like or appreciate. It can’t generate laughs, emotions, or thoughts.

Bottom Line: Almost worthless, the fifth Ice Age is a reminder that this series needs to be put to bed.

Recommendation: Nobody should see this movie.