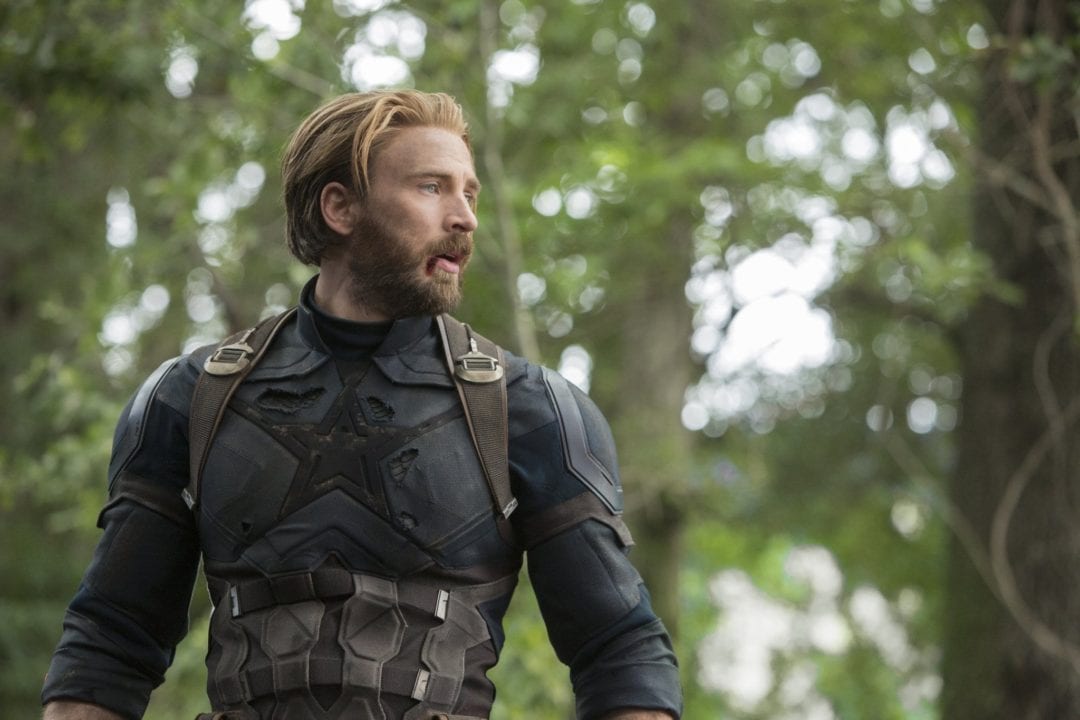 Of the three times I saw Avengers: Infinity War in theaters, there were only two universal audience-wide reactions: collective devastation at the ending, and the quiet, but equally profound, moment of euphoric giddiness following the return of Captain America. Despite being heavily featured in trailers, Steve Rogers stepping out of the shadows was one of the movie’s most iconic moments. It’s a point where audience excitement and franchise storytelling perfectly aligned — everybody knew it was going to happen, yet the execution was so good that fans were enthralled anyway. Infinity War’s big first act moment was its most predictable, but predictability is what made it exciting.

Cap’s return is another in a growing number of instances in the MCU where the most overt cultural influence, beyond both comics and other franchises, appeared to be professional wrestling.

Hear me out.  Steve makes his entry during a fight between Wanda Maximoff, Vision and two of Thanos’ children. Maximoff and Vision were blindsided by mysterious foes, and the ensuing skirmish was messy. The happy witch-robot couple was mostly on the back foot before the exiled Avengers intervened, giving the baddies a firm smackdown.

In wrestling terms, that’s a textbook “ambush and run-in”: heels (villains) attack lower ranked babyfaces (heroes) before more powerful goodies jump in to save them. The heels start as a dominant threat, but a benevolent intervention from stronger, often more popular heroes, leads to a surprise turnabout. Steve Rogers, the MCU equivalent of a premier performer, amps up the drama and maximizes intrigue. This is wrestling storytelling 101, a classic tactic for introducing new talent or characters into a tent-pole conflict.

This comparison is hardly novel. Nor is Marvel’s inspirational relationship with wrestling one-sided. WWE and the wider wrestling world has long used a cross-section of other mediums to construct their ongoing narratives. Wrestlers operate under “gimmicks” just like superheroes and -villains, their weekly conflicts heightened by melodrama mixing pulp fantasy and daytime soaps. Marquee matches and pay-per-views — the major Infinity Wars-style crossover events of wrestling — are promoted like actual combat sports to accentuate both the veneer of genuine athletic competition and heightened narrative stakes.

But what’s really interesting is how the Marvel Cinematic Universe borrows from wrestling. As the MCU moves towards the climactic battle with Thanos and beyond, the question of how to continue its story indefinitely is becoming more complicated. The current incarnations of Iron Man, Captain America, and Thor are era-defining, iconic portrayals. The actors and the characters have a huge following, and taking the story beyond its decade-long, near-two-dozen installment arc risks alienating that following. Marvel needs to figure out how to keep people invested in sequels and arcs that have a specific modus operandi, but whose peaks and valleys are still meaningful – something the WWE has managed for three decades now.

Like the comics that spawned the MCU, wrestling is built on narrative that never truly ends but still cultivates deep emotional investment. Fans know there’s a Raw and Smackdown coming after WrestleMania, but if WWE does its job right, ‘Mania will still have us on the edge of our seats. It’s the stories that matter: the indie star who’s fought for years to get a title shot on the biggest stage of them all, the best friends turned bitter rivals who need to settle a grudge, or the veteran good guy returning to the fray because the world needs him. Even though many of the plots are redone and re-used, the individual circumstances carry nuance, whether that comes from in the writing or the meta-storytelling, where athletes’ real lives and their fictional characters intersect.

WWE’s The Shield trounced by the villainous Braun Strowman at WWE Raw.

Black Panther and Captain Marvel are already set as flag-holders for the next phase of Marvel’s movies. Their stories are familiar, but their mutual perspectives on race and gender redefine the tenor of the universe. They, like each generation of WWE, will bring new energy and diversity to the MCU, making it their own and creating something that’s recognizable but different. Their presence pushes forward but doesn’t erase what came before. The old guard can still appear on occasion as the MCU and WWE develop an ongoing timeline rather than rebooting every decade. Just as crowds scream “Burn it down!” for Seth Rollins now like they cheered for the Heartbreak Kid Shawn Michaels in the mid-’90s, they’ll scream for Carol Danvers the way they roar when Captain Rogers steps out of the shadows.

Marvel has proven itself adept at harnessing the freedom a rolling release schedule gives them. They rehabilitated a gimmick that wasn’t working, taking Chris Hemsworth’s Thor from a blase riff on Norse mythology to one of the series’ most celebrated roles. Thor’s explosive third-act rendezvous with the team on Earth in Infinity War is one of the film’s highest highs, bringing to mind Stone Cold Steve Austin’s legendary takedown of the Alliance on a 2001 episode of Raw. Everett Ross re-appeared in Captain America: Civil War after a seven-year absence, and the arcs of both Loki and Bucky have leaned into the strong fandoms around the two roles. Marvel has, in some ways, displayed a better grasp of these machinations than WWE, which is notoriously stubborn when there’s dissonance between its vision and the audience’s reaction.

As sad as seeing Steve hang up the shield and Tony give up the suit will be, they’ve paved the way for even bolder stories. There’s Doctor Strange’s journey deeper into the mystic arts, Peter Parker’s struggle to balance being a neighborhood Avenger with getting a date, and Black Panther guiding Wakanda to become a global entity. That’s not to mention the broadening cosmic realm embodied by the Skrulls in the Captain Marvel trailer. New, more evocative stories are already in motion, setting up to main-event Avengers crossovers well into the future. I look forward to being quietly giddy and completely devastated all over again.

Monster Hunter and Mega Man Movies Are in the Works