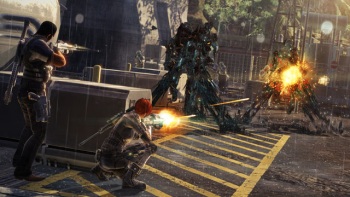 Electronic Arts executive Frank Gibeau caught some flak last week when he boasted that he’s never given the thumbs-up to a “single-player experience” during his time with the company. EA isn’t dropping single-player narratives completely, but solo action is now just one part of the overall, “connected” experience, which may also include conventional multiplayer action, tie-in games on Facebook and/or other social-networking options.

Not everyone was thrilled with the idea of mandatory “online applications and digital services” in every game they play, but Gibeau isn’t the only one who sees connectivity as the future of gaming. Ted Price, the chief executive of Ratchet & Clank and Resistance studio Insomniac Games, says the times have changed and game developers need to change along with them.

“I can’t imagine that any game we’d do from here on out will be single-player-only,” he told Gamespot. “The [game industry] has changed. As gamers, we have always been social, but thanks to the way technology has evolved, it’s much easier for us to play together. And it’s much easier for developers to create experiences where you can play together. So we want to encourage that with all of our games because ultimately, in my opinion, it’s often more fun to play with a friend.”

That’s the concern, isn’t it? Creating a multiplayer component almost inevitably drains resources that could have been put into the single-player game, and even if it’s contracted out to an entirely separate studio (which still costs money), the result isn’t necessarily going to be beneficial to the overall experience. I’m definitely a fan of playing with friends – multiplayer Mass Effect 3 was a blast, despite my frustration with the Galactic Readiness thing – but is everything really better online? I can’t say I’m convinced.