Everyone in town seems to have their secrets as the crack investigation team of Twin Peaks continues to chase false leads.

Less than a week has passed in the town of Twin Peaks since the murder of Laura Palmer. Most of the obvious suspects have been questioned, the scene of the crime has been analyzed, and the body has undergone a local autopsy as well as a series of other tests performed by unlikable FBI specialist Albert Rosenfield before being buried — but investigators are still looking for promising leads to solve the case.

Sheriff Truman and Deputy Andy start out this episode at the Palmer residence, gathering a statement from Sarah Palmer concerning the psychic visions she’s had while grieving for her dead daughter. Andy is sketching out a description of a man she saw with long grey hair and a disturbing smile. She then shares a vision of a gloved hand digging up Laura’s necklace (which, you’ll remember, was the final scene in the pilot).

After a brief revisit to the wonderfully bad soap opera “Invitation to Love”, it’s revealed that Agent Cooper is questioning Dr. Jacoby, one of the strangest characters in Twin Peaks and a fairly convincing suspect. Dr. Jacoby is not really cooperating with Cooper, citing doctor/patient confidentiality when confronted with questions he’d rather not answer. When asked why he’s being so difficult, Dr. Jacoby explains himself by telling Cooper that he is conducting a personal investigation into the case, and that’s more or less the theme of this episode.

Later on, the personal investigations many characters are making into this murder are explored in various ways. Donna and James (Laura’s best friend and secret boyfriend) are trying to solve the mystery. Audrey Horne, who wants to find the killer to impress and woo Agent Cooper, enlists Donna’s help in her own investigation early on in this episode. Shelly Johnson, who’s married to prime-suspect-so-far Leo Johnson, conspires with her secret boyfriend Bobby Briggs (who was officially dating Laura when she was murdered) to plant Leo’s bloody shirt at Jacque Renault’s house as a way to have Leo pinned for the murder.

I’m not sure if the Shelly/Bobby investigation is so much for Laura’s sake as it is a means to getting Leo locked up. Therein lies the other side of this personal investigation coin: Just what are the motives for all of the characters that hope to crack the case? Donna and James are trying to find the killer to make themselves feel less guilty for hooking up the day after Laura died, Audrey is trying to impress Agent Cooper, and Dr. Jacoby is just plain weird (also he sees his inability to figure Laura out when she was seeing him was a failure, and hopes to redeem himself by solving the case). The end result is even more secrets being held back from the investigative team that is actually getting paid to catch the killer.

While quite a few characters have latched on to solving the case, others are more focused on different issues. For instance: Ben Horne and Catherine Martell are more interested in planning to burn down the town mill in order to frame Josie Packard for insurance fraud. They share a very soap-opera scene at a local motel where they discuss this very soap-opera conspiracy.

It just so happens that a suspicious man with one arm that Deputy Hawk had spotted at the hospital was also staying at that motel, and Hawk had trailed him back there. Agent Cooper, Sheriff Truman, Deputy Hawk and Deputy Andy (i.e. all of the law enforcement in Twin Peaks) get ready to ambush the man’s room, when Deputy Andy drops his gun out of nervousness, causing it to go off. Andy admits to Cooper later on that he’s never used his firearm in the line of duty, and Cooper decides that they should all take a turn at the firing range. After seeing Andy’s performance, Cooper recommends that he practice for an hour a day, three times a week. 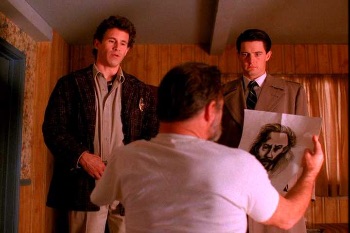 In the midst of this, another tale of love and woe is explored through the surprising connection between Deputy Andy and Lucy (the chatty dispatcher). Agent Cooper asks Andy about the status of their relationship, and Andy is surprised that Cooper knows his secret — even though Cooper has already figured out the supposedly secret relationship status of several other characters. In the midst of their discussion, Deputy Hawk shares a fantastic piece of prose that he wrote for his girlfriend.

Later on, the investigation team is led to search the apartment of Jacque Renault, and happen to arrive right as Bobby is planting Leo Johnson’s bloody shirt in the place. Bobby gets away (somehow), and the team quickly discovers the shirt as planned.

When Cooper was questioning Dr. Jacoby, one of the only promising leads he gave was that the night after Laura’s death, the doctor spent some time trailing a red Corvette belonging to a person of interest that Laura had told him about. This red Corvette belongs to Leo Johnson, and his car is the initial focus of one of the final scenes in this episode, which is a secret business meeting between Leo and Ben Horne. It’s revealed that Leo is Ben’s hired thug who will do the dirty work of burning down the mill when the time is right; it is also revealed that Leo is a killer, because he killed the brother of his partner Jacques Renault. (To keep him quiet? To make more drug money? To be clearly painted as an evil character who will murder indiscriminately?)

Then we move on to Donna and James returning to the place where they buried Laura’s necklace in the pilot, because Donna was present when Laura’s mother shared her vision of the gloved hand digging that necklace up. They find that it’s gone (which viewers knew already) and a dramatic musical moment is shared. The episode closes with Pete Martell and Josie Packard (the other side of the Packard Mill group) having some conversation and Josie receiving a disturbing call from Hank Jennings (the recently paroled husband of Norma Jennings who got Leo his job working for Ben Horne and seems to be bad news). So far Josie Packard has been depicted as an innocent in the show, but the fact that she has any kind of business with Hank Jennings raises all kinds of questions for viewers… just as the episode abruptly ends on another cliffhanger.

Bottom Line: The pace is here to stay: no quick resolution to the murder of Laura Palmer is coming any time soon. Meanwhile, other characters are being given more substance and screen time, and the generally unusual nature of the town itself is explored further.

Recommendation: Watching this show is very much like seeing an animated fractal by this point, no matter how deep you go, there are patterns and details at every level that grab your attention. This will either draw you in deeper, or becoming boring (depending on your commitment to the story).

Super Smash Bros. Director May Not Make Another Game in Series