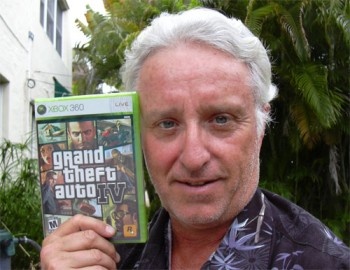 The day has finally come: Jack Thompson has been disbarred.

In a press release, the controversial former attorney, who described himself as “nationally and internationally known by virtue of his effective and successful opposition over the last 20 years to the broadcast, marketing and sale of adult-rated entertainment to children,” announced that the Florida Supreme Court has accepted the recommendation of Judge Dava Tunis and disbarred him from practicing law.

Despite Tunis’ statement that her recommendation was the result of “cumulative misconduct, a repeated pattern of behavior relentlessly forced upon numerous unconnected individuals, a total lack of remorse or even slight acknowledgment of inappropriate conduct,” Thompson believes there’s a more conspiratorial bent to his disbarment. “This disbarment is in retaliation, among other things, for Thompson’s Tyndale House book Out of Harm’s Way, published in 2005, which blew the whistle on the Florida Supreme Court’s earlier efforts in the 1990’s to literally pathologize his faith-based and successful activism against the American entertainment industry,” the ex-lawyer claimed in his statement.

He also claimed the timing of the decision resulted from a federal civil rights suit Thompson filed on September 19 against the Florida Bar, the Florida Supreme Court and all seven Supreme Court Justices. “The rush to disbarment is in retribution for the filing of that federal suit,” he said. “With enemies this foolish, Thompson needs only the loyal friends he has.”

Thompson is, of course, fully aware that the decision regarding his disbarment has been due in September since before Judge Tunis issued her recommendation, and statements like this, while fun, are also rather sad reflections of his increasingly fantastic and paranoid state of mind. His ongoing bizarre behavior has also resulted in many of his erstwhile “loyal friends” distancing themselves from his campaigns, although to be fair, he was recently awarded, rather ironically, a 2008 Freedom Award by America’s Freedom Festival in Provo, Utah.

While this is the end of Thompson’s legal career, it almost certainly won’t be the end of his efforts to capsize the videogame industry. If anything, Thompson’s rhetoric may become even more heated, as he will no longer be constrained by the guidelines and restrictions of the legal profession – not that such regulation ever had much impact on his behavior to begin with. But his status as a former lawyer, and the circumstances of his disbarment, will be inevitably intertwined with any of his future media interactions, lending far greater accuracy to his credibility than we’ve seen in the past.

And despite everything, Thompson is still swinging from the mat. “Thompson looks forward to successfully litigating his federal claims, now before U.S. District Court Judge Marcia Cooke in the Southern District of Florida,” he said in his statement. “Thompson always wanted to own a Bar. Now, armed with multiple U.S. Supreme Court rulings that no state bar can do what it has done to Thompson, he is set to own that Bar.”

So long and farewell, John Bruce “Jack” Thompson. It just won’t be the same without you.

UPDATE: Thompson has filed an emergency motion to stay the decision of the Florida Supreme Court to permanently disbar him from practicing law. Thompson claims the disbarment order contains “demonstrable factual errors,” and also that his disbarment will prevent him from carrying out his duties as a lawyer for one Richard Gorman, currently in jail as the result of a conspiracy carried out by Assistant State Attorney Matthew Alex Smith, with assistance from the Board of Governors of the Florida Bar. He also just can’t seem to stop himself from submarining his own efforts to salvage his career, even when things are most desperate: As part of his request for a stay, Thompson wrote, “Additionally, it is fascinating that Justice Cannady, who has undoubtedly reviewed absolutely nothing about this disciplinary case, has put his name to this disbarment order on the day that he was served with the federal civil rights action. What a coincidence.”

The Force Unleashed: The Next Star Wars Movie?