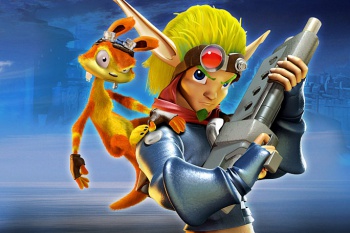 Soon you’ll be able to take the PlayStation 2’s dynamic duo (well, one of them) anywhere you go.

When you think of the PlayStation 2, a few iconic franchises come to mind, and chief among them is Naughty Dog’s Jak and Daxter saga. The duo were two of Sony’s poster boys – well, one poster boy and one poster ottsel. That fame may be why the series refuses to be forgotten, even as its successor’s console generation comes to a close. February 2012 saw the series ported to the PlayStation 3 in an HD remastering (the Jak and Daxter Collection), with the core trilogy available on one Blu-ray disc. Still, there are console-less gamers out there who have yet to experience the legacy of the Precursors, so Sony is preparing to release another port. This time, the trilogy will be coming to the PlayStation Vita, spinning and shooting its way to the portable audience.

Slated for a June release, the Jak and Daxter Trilogy includes the three core titles of the series: Jak and Daxter: The Precursor Legacy, Jak II, and Jak 3. The games will take advantage of the Vita’s touch interface in some mini games, though don’t expect the fundamental gameplay to be any different from the console versions.

For the shameless PlayStation trophy collectors (you know who you are), the Vita trilogy contains a full set of trophies for each game. That means you can nab six Platinum trophies between the PS3 Collection and the Vita Trilogy. Just, you know, in case you’re a huge fan of the series, or if you’re that desperate to prove yourself to strangers on the internet.

Jak and Daxter is a classic series, and well worth checking out if you haven’t before. The Trilogy doesn’t include the obligatory kart racer Jak X: Combat Racing (which is a shame) or the PSP spinoff title Daxter (which may be for the best). The Jak and Daxter Trilogy will be sold for $29.99.

Among the Sleep Awakens