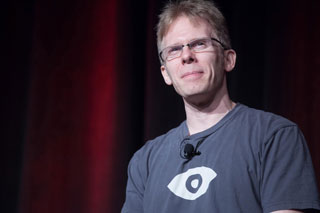 id Software founder and Oculus CTO John Carmack is suing Zenimax for $22.5 million he claims is still owed from the company’s purchase of id.

John Carmack and Zenimax have been in the news a lot of late. Zenimax was awarded $500 million in its lawsuit against Oculus VR in early February, a decision that Carmack took to Facebook to mock shortly thereafter. Zenimax issued a response to Carmack’s comments, and then things went quiet, until yesterday.

The Dallas News reported yesterday that John Carmack has filed another lawsuit against Zenimax – this time in an effort to claim $22.5 million that he says the company owes him as a final payment from its purchase of id Software. Zenimax bought id – the company Carmack co-founded in 1991 – in 2009 for $150 million.

Carmack’s complaint says that Zenimax will “soon be obligated to play Plaintiff John Carmack more than $45 million in cash under the terms of the Asset Purchase Agreement and a Convertible Promissory Note by which Zenimax bought the assets of id Software in 2009.” It also says that, “Zenimax clearly doesn’t want to pay…Zenimax is already in breach of the Asset Purchase Agreement and Convertible Promissory Note.”

The suit goes on to explain that Carmack had the option of converting the money he was owed into shares of Zenimax common stock, an option he says he exercised on Feb. 16, 2017. He further claims that he offered to sell those shares back to Zenimax at the $45 pre share put option price. That didn’t happen, the suit says, because, “ZeniMax failed to issue any shares of stock in response to Mr. Carmack’s conversion notice, depriving him of the ability to either sell the shares or exercise the put option when it ripens later this year.” The complaint’s closing says in part, “Now that the final installment of that bill is coming due, ZeniMax is simply refusing to pay. But sour grapes is not an affirmative defense to breach of contract.” You can read the entire complaint here.

Predictably, Zenimax has responded. In a statement given to Upload VR, the company said,

“We have reviewed John Carmack’s latest legal complaint which is completely without merit. We note that this is Mr. Carmack’s second complaint against ZeniMax. In the recently completed trial of ZeniMax Media Inc. et al v Oculus VR et al, in which Mr. Carmack was a named Defendant, and in which ZeniMax was awarded $500 million in damages for misappropriation of its intellectual property, Carmack had counterclaimed, seeking damages for ZeniMax’s alleged violations of his employment agreement.

“The jury flatly rejected Mr. Carmack’s complaint, and found for ZeniMax. Mr. Carmack was personally found guilty by the jury of the theft of ZeniMax’s property, including thousands of confidential ZeniMax documents he secretly took when he quit his employment, and his theft of the entire source code to id’s latest game, RAGE, including the id tech 5 engine.

“In addition to those crimes, it was revealed by an independent court-appointed computer forensics expert, that upon receiving notice of the Oculus lawsuit, the files on Mr. Carmack’s Oculus computer were intentionally wiped-destroying the evidence, and that a sworn affidavit Carmack filed with the Court denying the wiping was false. The wiping occurred right after Mr. Carmack researched on Google how to wipe a hard drive. And there was much more.

“Apparently lacking in remorse, and disregarding the evidence of his many faithless acts and violations of law, Mr. Carmack has decided to try again. We look forward to presenting our response to Mr. Carmack’s latest allegations in Court.”

Aside from this new legal drama, there’s still the question of whether Oculus plans to appeal the $500 million verdict issued against it in February. Not only that, but there is still the looming possibility that Zenimax could seek an injunction to halt sales of the Oculus Rift until the offending code is removed. It looks like we’re in for another legal battle in Texas.

If you want to follow along, the case number is 3:17-cv-00661-B in the United States District Court, Northern District of Texas, Dallas Division. You can find it on PacerMonitor here.

Hit the Slopes in a Steep Free Weekend Starting Tomorrow

The Price of Hearthstone Packs is Going up in Europe