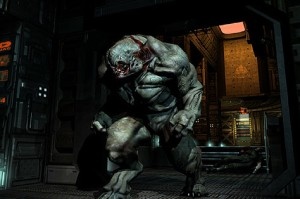 John Carmack of id Software has shed some early light on Doom 4, saying the game will shift away from the horror stylings of Doom 3 to become more of a pure action title.

Carmack said the game would be “significantly different” in a recent interview with Shacknews, admitting that complaints about the “contrived nature of monsters hiding in a closet” in Doom 3 as well as the game’s extreme darkness were “completely valid.” As a result, Doom 4 will be more akin to Doom 2 than to its direct predecessor.

“One of the things that I come to in my limited contributions to the whole Doom 4 design process is, it has to still be you beating down the bad guys,” Carmack said. “It has to be a triumph of heavy weaponry over demonic forces in some way, and you have to be blowing demons all to hell around you, and it’s a more positive side of things there.”

“It’s not that you’re running around frightened down to your last bullet,” he continued, explaining how the game will be more about kicking ass than merely surviving. “There will occasionally be that, but it should be much more of you winning, because that was always the point in Doom – you are the hero, and you are winning. You’re going to beat back all the hordes of Hell using all the tools at your disposal.”

In fact, Carmack revealed that complaints about Doom 3 were one of the reasons for the cancellation of Darkness, a rather ironically titled survival horror game that was killed after 18 months of work. Describing the game as built around dimly-lit levels and monster closets, he said the decision was made to shut down production when they realized, “We would have been keeping Doom 3’s faults.” The focus on action in Doom 4 is inherently better for gameplay, he explained, saying, “You get to punctuate [the gameplay of standard action titles] a lot more with triumphs and successes, and you just don’t get to do that very much in survival horror. You know, you want to say, ‘I’m victorious,’ not, ‘I’m not dead.’ It’s just a fundamentally more rewarding genre to be in.”

Very few changes to the id Tech 5 engine are planned between Rage, the project id revealed at E3, and Doom 4; instead, Carmack said there will be a shorter development period for the game with a focus on creating a solid gameplay experience and more robust multiplayer options than those in Doom 3. Doom 4 is expected to be developed for the Xbox 360, PlayStation 3 and PC, and typically for id, nobody is even guessing at a release target.

Turner Puts GameTap On The Block