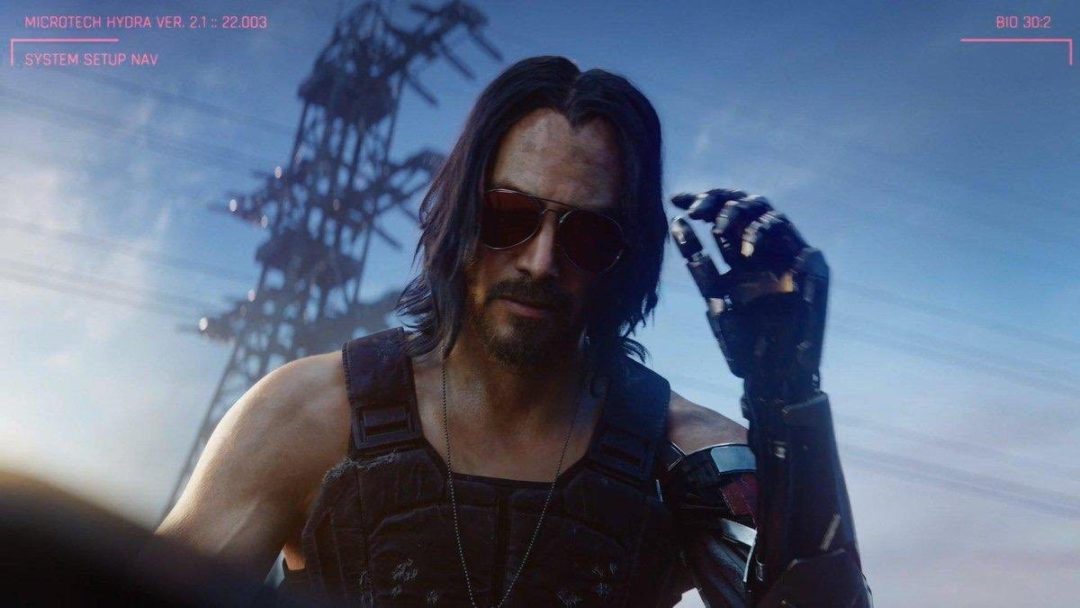 CDProjekt Red’s Cyberpunk 2077 was always going to be one of the highlights of Microsoft’s E3 2019 press conference. The highly anticipated RPG from the studio behind the acclaimed The Witcher series started its E3 2019 showing off strong, with a cinematic trailer depicting a classic heist gone wrong. The cybernetically enhanced criminal V expected this score would land him in the big leagues, but instead it killed his partner and led to his buyers trying to kill him. A sweet fight ensues as V unleashes with blades hidden within his arms only to be undermined by having his very body hacked. Shot at point blank, he blacks out only to have his system reboot in a junkyard, a figure with dog tags and a metal arm looming over him.

“Wake the fuck up, samurai,” Johnny Silverhand says. “We have a city to burn.” Then he pulls off his shades and reveals the unmistakable face of Keanu Reeves, who dramatically took the stage in person in a cloud of smoke wearing a cyborg demon T-shirt, jacket and slacks and making more big promises about the game releasing on April 16, 2020.

Reeves has never appeared in a video game before and his appearance at E3 was an incredible surprise. But his grace before the gaming audience wasn’t. The same characteristics that made him seem vapid in his early career, whether he was playing a surfing FBI agent in Point Break or a dumb metalhead in Bill & Ted’s Excellent Adventure, feel like the serenity of a bodhisattva now that he’s 54. He recently stupefied Stephen Colbert when answering the age old cosmic question “What do you think happens when we die?” “I know that the ones who love us will miss us,” was his entirely agnostic but honest answer.

While Reeves hasn’t played a video game character before, it really feels like he has. His most famous character, The Matrix’s Neo, is a sort of gamer fantasy. He lived his entire life in a virtual world and while he remains just a man in the flesh (at least until things start getting really weird in the sequels) he’s a veritable god when using his mental prowess to fight evil AI with kung fu and lots of guns. The Matrix might call its baddies agents, programs, or viruses, but they’re effectively malevolent NPCs trying to make sure all the humans play the game the way it was intended.

Similarly the John Wick series feels like an adaptation of a legendary video game that never was. It’s filled with barely explained rules and lore, with characters strutting around citing titles and organizations that you can only understand through context. You can travel to exotic locations, but no matter where you are there’s a Continental hotel providing the opportunity to spend you special currency on gear, healing, and information. Markers, the oversized coins showing another assassin owes you a big favor, feel like quest items that can be used to either force you into a particularly nasty mission or to enlist an ally when you really need one.

Every big fight has its own gimmick and distinct scenery. There’s the one in the bathhouse that starts with stealth stabbing and turns into a massive shootout where you have to follow the target while avoiding killing innocent bystanders. There’s the museum gunfight that’s all about tumbling around hallways and ducking for cover behind statues. There’s the brawl with two guys armed with daggers that won’t ever kill you but will reduce your stamina ahead of the final boss. There even seem to be quicktime events like when John assembles a gun to kill one guy before running upstairs for the most epic knife fight of all time. It’s entirely unsurprising a John Wick video game is in the works, though Reeves is not expected to be part of it.

It’s unclear how big a role Reeves’ Silverhand will play in Cyberpunk 2077. It makes sense that he can’t play the star considering that CDProjekt Red is offering players the chance to choose a male or female protagonist and customize their backstory. Reeves’ schedule and the presumably high price that comes with his celebrity would probably also make that impossible. But the Chinese-Hawaiian-English actor feels right at home in a genre that has traditionally celebrated cultural and racial diversity as part of its transhumanist approach to technology.

CDProjeckt Red’s promised narrative focus should also benefit from an actor with Reeves’ range. Reeves recently appeared smooching comedian Ali Wong in the rom-com Always Be My Maybe and will play Duke Caboom, a toy based on motorcycle daredevil Evil Knievel in Toy Story 4. Neal Stephenson’s cyberpunk classic Snow Crash showed romance and humor can fit into the genre as well as hackers and street samurai and just a little of that could go a long way in making the world and story of Cyberpunk 2077 feel fully realized.

Microsoft’s E3 presentation was filled with exciting news, but Reeves’ star power made it shine even brighter. It’s the same light that hasn’t faded in his 35-year career and seems to only be building in intensity as he shares his warmth and talent across media and genres. Here’s hoping we see plenty more of him in the future, both the real one and the version CD Projeckt Red has imagined.

Did The Critics Get Godzilla Wrong?

Microsoft’s Game Pass Is a Kafkaesque Nightmare on PC