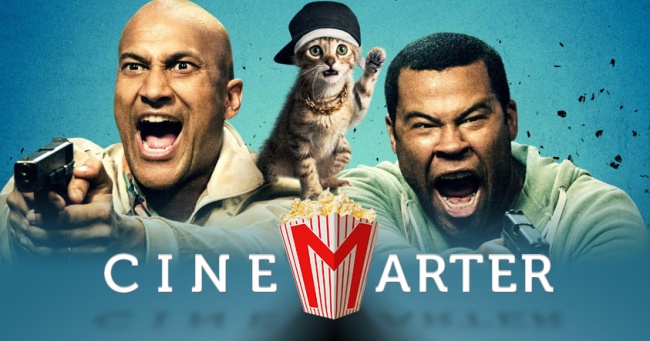 I’ve always been of the belief that adding a cat to a movie is never a bad thing. Even a cat cameo in a bad movie can be a nice distraction from whatever’s going on. One of the running gags in Keanu is how awesome its eponymous cat is, and how pretty much everyone falls in love with it. Why? Because it’s funny, and because cats are cute. Unless you don’t like cats, of course, you monster.

Keanu is a movie about a man on a mission to retrieve his stolen kitten. Rell (Jordan Peele) went through a tough breakup, but when Keanu showed up on his doorstep, he once again could see the light at the end of the tunnel. But just weeks after this chance encounter, Rell’s house is broken into, and Keanu goes missing. So, Rell teams up with Clarence (Keegan-Michael Key) to try to track the cat down, eventually finding him in a club run by Cheddar (Method Man), a gangster who has taken Keanu for himself. They pretend to be killers and agree to accompany the gang on a drug run in exchange for the kitty. Where do we go from there? You’ll have to see the film to find out how well that goes. It’s an action-comedy, so you can probably guess it doesn’t all go swimmingly.

You might recognize Keegan-Michael Key and Jordan Peele from the sketch show Key & Peele. In some respects, Keanu feels like a stretched-out sketch from the show, with both the positives and negatives associated with that feeling. It is generally quite funny, as the Key & Peele sketches often were, but it also often overstays its welcome, both in terms of the general running time and in how some of the jokes that are initially funny get run into the ground to the point that they make you want to quit watching.

One of Keanu‘s greatest successes and failures comes in the duo’s attempts to say something about race relations in America. Both Peele and Key are multiracial, and their characters are nerdy, middle-class types. Dropping them into an area populated by more “street” characters results in some humorous and thought-provoking scenes about identity and code-switching. But while the film gets points for even addressing that, it, unfortunately, doesn’t delve very far into that subject matter. You can tell, for instance, that Clarence is initially uncomfortable dropping numerous profanities just to sound tough, but beyond that uneasy feeling, the film doesn’t find itself too concerned with the subject matter. It would much rather cut to a shot of a cute kitten dressed up in a do-rag and a golden chain, which, I suppose, isn’t ever a bad idea.

Keanu isn’t great, but it’s more than funny enough to warrant a watch.

The “action” in this action-comedy isn’t really any good – it’s just various slow-motion shootouts with a cat running through them – and there are just as many jokes that either miss or get overplayed as there are ones that are successful. There are a couple of really funny cameos – including an uncredited Anna Farris, who plays a coked-up, sociopathic version of herself (we assume) – but even they wind up playing for far too long. The story is too simple to last for a feature-length running time without padding, and there really isn’t much to any of it, beyond when it dabbles in social commentary.

Still, a comedy works as long as it’s funny, and Keanu is easily funny enough to recommend. Even when it’s stretching hard to reach 90 minutes, or when we’re on our third slow-motion shootouts, Keegan-Michael Key and Jordan Peele are funny enough to hold our attention. And, of course, there’s the eponymous kitten, who gets a lot of screen time, is loved by every character in the film, and even gets a brief speaking role where he’s voiced by the absolutely perfect person. Keanu isn’t great, but it’s more than funny enough to warrant a watch.

Bottom Line: Lots of laughs but little more, Keanu is a funny movie with a cute cat.