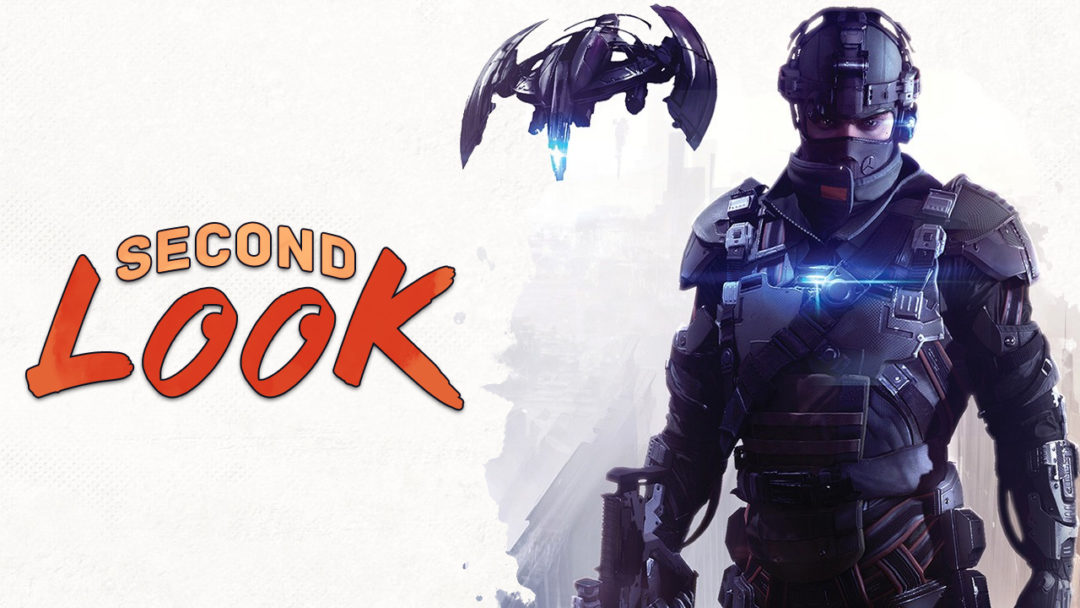 Guerrilla Games‘ Killzone Shadow Fall seems ripped from the headlines. Deniable paramilitary operations. Drone warfare. Mass deportations. Giant walls to keep out “undesirables” searching for a better life. Supremacists and cultural oppression. Some of these ideas were timely when the game released five years ago, but in 2019, it’s all more disturbingly relevant than ever.

In past games, the Helghast were an incensed yet mighty people, furious at humanity for beating them down and casting them onto their miserable rock of a home planet. They suffered for years, evolved, and struck back — but it was ultimately futile. Apocalyptic events of Killzone 3 have left the Helghast living in cargo container cities across half the planet Vekta. Their government is torn, terrorists are running openly among their population, and the one nation that could help them is doing everything it can to suppress them further.

Players enter this world from the perspective of a Vektan secret police officer, Lucas Kellan. His father was killed during the Helghast’s arrival on Vekta, so he’s more than eager to join the Shadow Marshalls, groomed under the guidance of ultra-patriot surrogate father and Marshalls leader Thomas Sinclair. Sinclair assures Lucas that he’s doing what’s “necessary” to keep Vekta safe. “That means taking the fight to the Helghast,” he tells Lucas.

Thus, Lucas gladly decimates Helghast monuments and executes their soldiers with extreme prejudice, all while receiving endless praise. Killzone Shadow Fall goes out of its way to make you feel like the righteous hero protecting your land, righting the wrongs of an evil occupying nation of outsiders. The Helghast don’t belong here; they’re a cancer on the fringes of Vektan’s crystal-clean cities and civilized people.

Then something goes wrong with a weapon at a Vektan research station. “It was supposed to give us leverage. Purely a deterrent,” Sinclair assures, right before adding that if the Helghast were to wield it, then it would be “genocidal.” Players learn that a Vektan supremacist scientist has created an “Ethnic Bullet” bioweapon, casually testing it on all the Helghast-born workers under her employ. Suddenly, Sinclair’s nationalistic bravado starts to sound hollow, especially when you encounter your Helghast equal, Maya “Echo” Visari, sent in by her government to also contain the situation. She struggles to process the depravity. “Wasn’t destroying Helghan enough? I won’t see any more innocents die.”

A Helghast/Vektan half-breed, Echo’s allegiance is to peace, not her mother’s New Helghan or anyone else. Echo and Sinclair both claim they want to end the conflict between the Helghast and humanity, but they pursue it extremely differently. Most notably, Echo spares Lucas’ life when she has every reason to put him down, because despite her outrage, she sees he’s confused and alarmed as well. For the first time, he starts thinking. Even his voice changes, rising from a generic FPS protagonist gravel to empathetic and concerned.

However, his lingering questions are drowned out by attacks against Vekta by the Black Hand Helghan terrorist group. You’re witness to the first, watching the ashes fly as civilians are killed by rubble and an insurgent shoots a medic right in the face. Rather than a convenient fade to black, Killzone Shadow Fall makes sure you see the fruits of continuing hatred and violence. Every attack you answer is itself a direct response to the missions you were praised for mere hours ago. The only difference now is that you’re on the receiving end. All your actions did was inflict more suffering, but Sinclair’s not worried about that. He’s sending Lucas back over the wall to eliminate the Black Hand threat, once and for all.

How convenient that Helghast-born Vektans and half-breeds are being deported in answer to the terrorist attacks. Lucas blends in among them easily, scorned and jeered arbitrarily as race traitors by both sides. When you enter New Helghan this time, it’s not a convenient fringe operation against armed operatives, but shootouts in civilian quarters. Everyone cowers whenever you raise a weapon. The Helghast in your way are struggling to keep the peace in an overpopulated city, not soldiers on the advance.

New Helghan’s capital isn’t some glorious monument to the ruling Madam Visari or a military base in hiding; it’s a monument to all that the Helghast have lost. Their home is gone, and they’re miserable, desperately hiding behind military might just to survive. Worse still, your actions have given validity to the terrorists that attacked Vekta, granting them political clout where once New Helghan also opposed them. But that doesn’t matter to Sinclair — only assassinating the Black Hand’s leader does, at any cost.

Sinclair wasn’t there when you stopped a Helghast civilian from shooting himself in despair or offered a medpack to a woman’s sick brother. He doesn’t care about those things. The only good people are Vektans, with their privileged, heavily guarded cities and civilized leaders who would view a genocidal bioweapon as a deterrent. 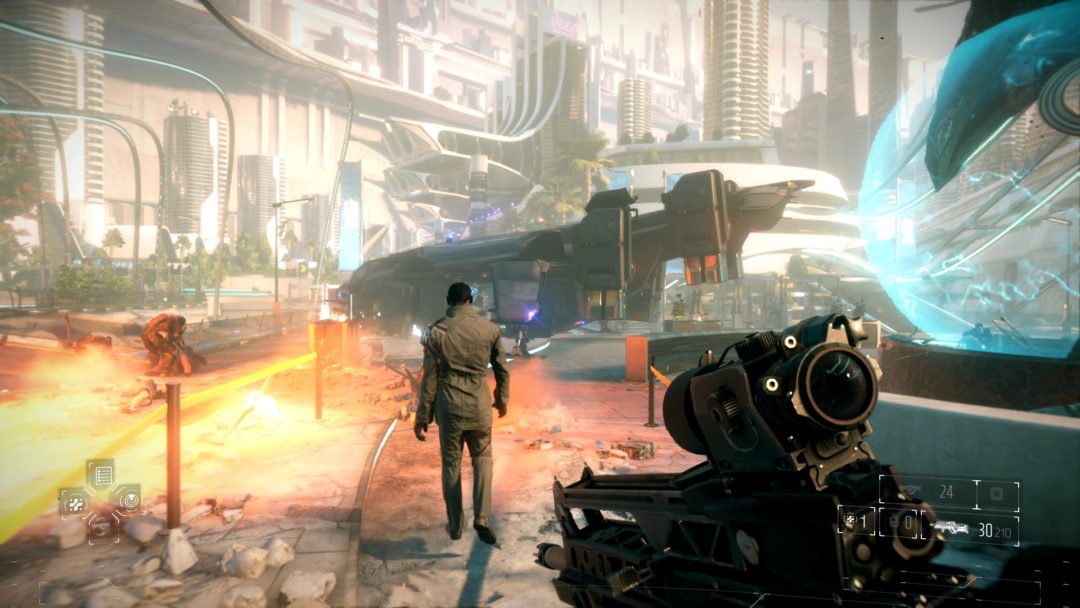 In the end, it’s not even Sinclair who saves Lucas from behind enemy lines, but Echo. She’s scrambling to halt a war that’s almost surely on the horizon, yet only Lucas is listening to her. Each side’s leaders assume the worst of the others, never pausing to consider the real problems and if reconciliation could solve them. With the Black Hand and Sinclair’s Shadow Marshals bombing public buildings and tearing up the skies, war is mere hours away on a daily basis. The people you’ve struggled to save may very well die for another conflict they never deserved.

With Lucas’ help — your help — Echo has a chance to prevent this fate, but Sinclair stonewalls the very idea. He doubts everything Lucas says the moment Sinclair knows Echo is there helping Lucas. Sinclair would rather see her dead than dare listen to what she has to say.

This culminates when Echo and Lucas are finally on the verge of stopping the terrorists in the ruins of old Helghan. Sinclair sends brave men and women to their certain deaths on an offensive against the Black Hand as the Ethnic Bullet is unleashed. He is then pleased that they die — this can galvanize a war effort. He knows the Ethnic Bullet works, and he has proof of “New Helghan’s” treachery. He has the chance to wipe out the Helghast forever and make Vekta great again.

Worse still, after Sinclair shoots the terrorist leader dead, he proceeds to turn his gun on you. “Every day New Helghan exists, we are under threat,” he preaches as much to himself as he does to you. The facts don’t matter, because Sinclair “knows” all he needs to about the Helghast. The only doubts he has now are about you.

“I thought I knew you, Lucas,” says Sinclair. “After everything these sons of bitches have taken from us in the past, I didn’t think you’d be the one I lost faith in. Be the one I couldn’t trust. Every day, New Helghan continues to exist we are under threat. I’ve shown them that. And now I’ll show them how we can remove that threat. Forever. I’ve always tried to protect you, son. I’m sorry I couldn’t be that person.”

He shoots Lucas right between the eyes, without hesitation. We see the true menace that has plagued Helghan and Vekta in Sinclair — hatred and fear embodied. Prejudice made flesh. With Lucas’ death, it seems peace on Vekta is lost as the credits begin to play — until they stop. The player returns, now in Echo’s shoes. And her one objective is to stop Sinclair.

He’s giving a speech to formally reignite the war that will kill millions more, even using Lucas’ passing to bolster his rhetoric. When Echo lifts her rifle to silence him, the shot she takes isn’t for Helghan or for Vekta. It’s to stop this war. One last shot, for all those who died needless deaths and for the only other person who dared to see, like her, that all people are ultimately one and the same. “For Kellan.”

Whether this assassination actually succeeds in ending conflict or just creates new conflict is left uncertain. But it raises questions of just how difficult it is to end a cycle of hatred and indoctrination or to morally hold leaders accountable. For all the talk of its being a token launch title for the PlayStation 4, Killzone Shadow Fall demonstrates a boldness and nuance with its political narrative that is rarely seen, and it doesn’t offer easy answers.

Undead Labs, the State of Decay Dev, Is Opening a New Orleans Studio

Star Wars: The Rise of Skywalker Is Polarizing Critics, but for What Reasons? – The Big Picture