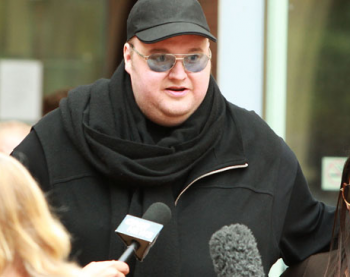 Dotcom’s open to working with anyone, except the National Party, instigators of a Nazi smear campaign.

Kim Dotcom, whose US extradition is still a very real possibility, has formally launched his Internet Party. New Zealand’s next general election is in September, and Dotcom believes he’ll have no problem getting the 500 members – each paying $1.29 for a three year membership – the party will need to stand in the election. In order to get into parliament, the Internet Party will need either to win an electoral seat or secure 5% of the vote. Dotcom claims that at least one current member of parliament will be willing to join the Internet Party, but he hasn’t named the MP. At least three other sitting MPs are said to be very interested in joining the Internet Party.

Dotcom says he’ll be willing to work with any political party, except the National Party, led by current PM John Key. Dotcom blames the National Party for what he describes as a “disgusting smear campaign,” in which Dotcom has been called a Nazi sympathiser because he owns a rare signed copy of Mein Kampf. The smear campaign also claims Dotcom has a Nazi flag hanging in his basement. “That is completely false. It’s a lie.” Dotcom refused to go into any detail at the launch event, saying he wanted to concentrate on the party’s launch and call for members.

The Internet Party says it will give New Zealand “faster, cheaper internet, create high-tech jobs, protect your privacy and safeguard our independence.” Internet connectivity costs will be cut 50%, and mass surveillance of New Zealanders by the government will be stopped. It also wants to create a New Zealand cryptocurrency, and the first person to join the Internet Party – party secretary Anna Sutherland – used Bitcoin to pay her membership fee.

It’s been a busy few days for Dotcom, who announced earlier this week that his company Mega – risen from the ashes of Megaupload – will be listed on the New Zealand stock exchange, at a projected value of NZ$210 million ($181.7 million). Dotcom isn’t listed as a shareholder or director, but he is named as principle strategist. His wife holds a 26% stake, through a trust.

DC Marks 75th Anniversary of Batman With Year Of Celebrations