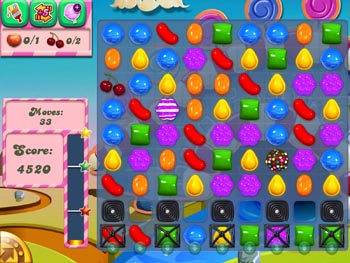 Beginning with the issue of cloned games, King CEO Riccardo Zacconi apologized for having published Pac-Avoid, a game that was developed with the intention of it strongly resembling Scamperghost, a game that King was going to publish until the developer Matthew Cox received a better deal from one of King’s competitors. “The details of the situation are complex, but the bottom line is that we never should have published Pac-Avoid,” Zacconi said in the open letter. “We have taken the game down from our site, and we apologize for having published it in the first place.” Zacconi called Pac-Avoid “an exception to the rule.”

King also came under heat after trademarking the words “candy” and “saga” in attempts to protect its intellectual property for popular games like Candy Crush Saga. In line with trademark law, King is now investigating the takedown of similar games using “candy” and “saga” in the title. The Banner Saga became a target. When developer Stoic Studios attempted to trademark its strategy RPG The Banner Saga, King filed an opposition motion. When this was revealed, a King representative said the company has no intention to block The Banner Saga.

“We don’t believe that The Banner Saga resembles any of our games, but we already have a series of games where ‘Saga’ is key to the brand which our players associate with King,” Zacconi said. “We’re not trying to stop Stoic from using the word Saga, but we had to oppose their application to preserve our own ability to protect our own games. Otherwise, it would be much easier for future copycats to argue that the use of the word ‘Saga’ when related to games was fair play.”