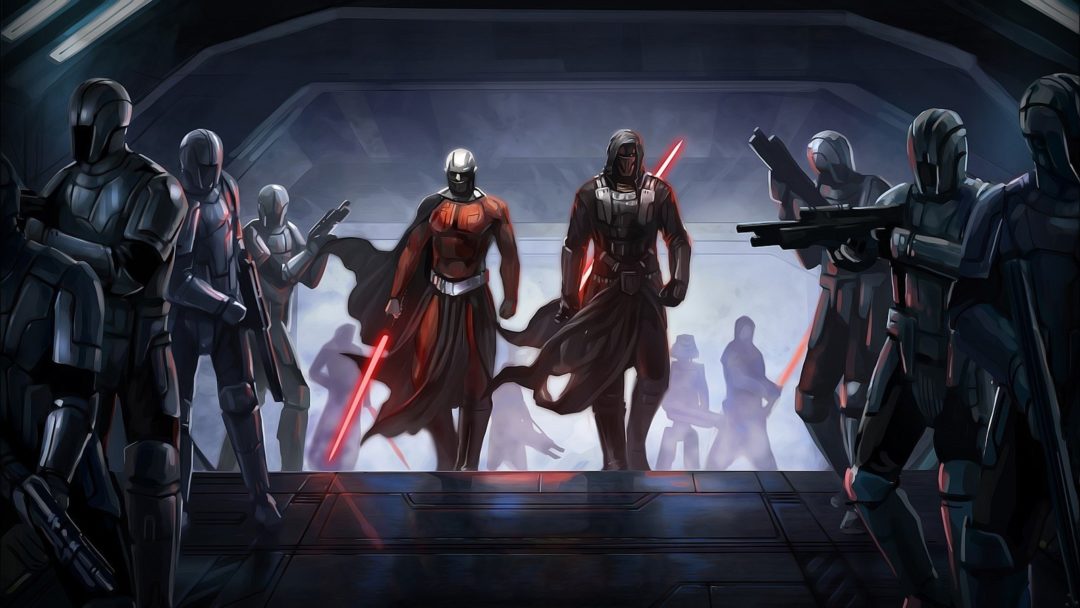 The latest news out of the galaxy far, far away has confirmed that a script for a Star Wars movie based on the Knights of the Old Republic games is in development by Avatar and Shutter Island writer Laeta Kalogridis. It’s an exciting bit of news for fans of the games, which provided a bold, complex new direction for Star Wars at the same time much of its target demographic were expressing dissatisfaction with the prequel trilogy.

Since Star Wars’ first left theaters after 1983’s Return of the Jedi, the expanded universe of spin-off properties became fans’ lifeline. I was born around that time and came to connect with the Star Wars mythos through the video games, toys, novels, and comic books far more than through the original movies themselves. Characters like Kyle Katarn occupied the same pantheon for me as Luke and Leia, which meant I was primed to dive into a deep game like BioWare’s 2003 RPG Star Wars: Knights of the Old Republic.

Prior to Knights of the Old Republic, most Star Wars games had a very simple premise. Every kid watching the movies wanted to be right there in the action blowing up the Death Star in an X-Wing cockpit like Luke, burning through an asteroid field like Han, or zapping stormtroopers in their stupid faces like Leia. The movies were so cool that simply reenacting them was enough for a surefire hit, and that was the premise for all-time classics like the Super Star Wars trilogy on Super NES or the shooter-on-rails Star Wars: Rebel Assault, which gleefully took your character on a canon-wrecking whirlwind tour of adventure from Beggar’s Canyon to the Death Star run.

The Star Wars novels were set in a world where our heroes had deposed the Empire, formed a New Republic, and founded a new Jedi Order, and the games also began to incorporate more Jedi and their mysterious Force powers. Luke was the only Jedi who made an appearance in games until 1997’s Star Wars Jedi Knight: Dark Forces II, which was set in the post-Empire world of the New Republic. Before that developer seemed to be unwilling to disturb the mythos or felt that gaming technology couldn’t do Jedi powers proper justice,

Jedi Knight broke the dam for games focused more on lightsabers and force lightning than dogfights and Death Stars. Debuting in 2003, a year after Attack of the Clones hit theaters, Knights of the Old Republic did something that no Star Wars game had done before. It laid out events entirely divorced from the films while grappling with the deeper complexities of what it might mean to have a bunch of celibate, robed lunatics with laser swords running around wielding moral authority. It was able to accomplish this more involved, more mature storytelling in the most Star Wars way imaginable: by setting the game 4,000 years before the events of the original films in an era that somehow still had lightsabers, hyperdrives, and blasters.

Built on the Star Wars tabletop roleplaying system (which was itself based on Dungeons & Dragons), Knights of the Old Republic was a full RPG that placed your custom character at the center of an epic story. It contained all of the essential DNA of Star Wars while being blessedly unable to revisit any well-trodden ground like the Battle of Hoth.

As an RPG with hours of play time to fill rather than an action title meant to be knocked out in a brisk session, Knights of the Old Republic let players spend time with a cast of wonderful characters including the high-strung Jedi Bastila Shan, the odd couple Mission and her Wookiee partner Zaalbar, the conflicted Jedi apprentice Juhani, the darkly funny murderous droid HK-47, and dreamboat straight arrow Carth. Their sparkling repartee and emotional complexity worked in service to a story that felt like Star Wars, even as it didn’t feature any series mainstay characters. It also completely eschewed and often undermined the hero’s journey and monomyth story structure that creator George Lucas has openly spoken of emulating. The late-game revelation surrounding the player’s character calls into question everything you thought you knew about the intentions of the Jedi Order and your fight against Darth Malak. The game also knew its audience and delighted in the occasional bit of fan service. During an early portion, players must rescue Bastila from a gangster who has dressed her in a somewhat demeaning outfit. One of the player’s dialogue choices when greeting the unimpressed heroine reads: “I’m [your name], I’m here to rescue you!”

The sequel by Obsidian, Knights of the Old Republic II: The Sith Lords, came out the following year deepened Star Wars’ lore even further. Characters attacked the black-and-white moral choice system at the heart of the game and the failings of both the morally righteous Jedi and the ungovernable rage of the Sith. The final conflict tasked players with saving the very nature of the Force itself, or usurping it for themselves.

One of the tenets of Star Wars fandom is to not overthink things. Sound in space, lasers that stop three feet from their source and clash against each other like steel, interstellar governments that last 1,000 generations without notable technological or sociological change might not make sense, but they’re there for you to have fun. The Knights of the Old Republic series dared to take the whole thing seriously, using the very best elements of Star Wars to weave stories that, for once, felt as epic and consequential as the films themselves. The question is whether Lucasfilm will be brave enough to use Knights of the Old Republic to tell truly new stories since the recent movies have remained in such familiar territory. There’s no question that there will be lightsabers and Jedi and the mysteries of the Force, but abandoning that boldness to redefine what Star Wars is would mean misunderstanding what made Knights of the Old Republic a gem.

That Dragonborn Feel: How I Turned Elder Scrolls Into a Board Game