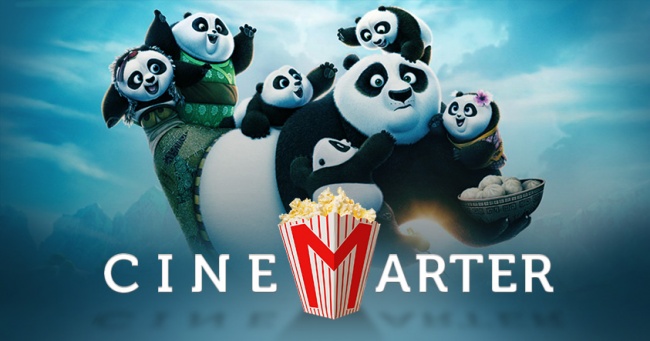 DreamWorks Animation hasn’t met a franchise it doesn’t like, so here the studio comes with Kung Fu Panda 3. This isn’t a film that exists because there’s a good story to be told, or because these characters are particularly interesting to explore; it’s here because the two previous movies each grossed over $600 million worldwide. It’s an obligatory film and a good business decision. The surprise for audiences is that’s it’s also perfectly fine – even, at times, good – which is a first for the studio when it comes to the third installment of a trilogy.

Kung Fu Panda 3 sees its lovable panda hero, Po (voice of Jack Black), have to face a new foe in Kai (J.K. Simmons), a bull who had been banished to the Spirit Realm for half a millennium, but has now returned in order to steal the chi (read: kill, but for kids) of all the warriors across the land. So, it’s up to Po and the Furious Five members to stop him. Except that they can’t. The only way to defeat Kai is by becoming a Chi master, something that not even Master Shifu (Dustin Hoffman), can teach.

Conveniently, Po’s biological father (Bryan Cranston) shows up and tells Po of a secret panda village, where Po can learn to become a Chi master. It all builds up to a confrontation between Po and Kai, as you’d expect if you’ve seen either of the previous Kung Fu Panda films, or ever watched a single movie in which there was a protagonist and antagonist. There are a couple of unsurprising “surprises” along the way, and a couple of minor action scenes thrown in, but mostly we’re just doing the “Po needs to learn a new skill to defeat a bigger enemy” story.

It feels a lot like the first film, both in the simplicity of its story, what that story contains, and in the way it winds up being almost entirely focused on Po, leaving its supporting cast members wondering what to do with themselves. You have an all-star vocal cast here, with the likes of Angelina Jolie, Seth Rogen, Lucy Liu, Jackie Chan, Kate Hudson, and David Cross, as well as the aforementioned Bryan Cranston, Dustin Hoffman, and J.K. Simmons. But it becomes the Jack Black show once again as he learns how to “be a panda.” That’s fine, and often funny, but a disappointment given the assortment of characters from which the film could draw.

Kung Fu Panda 3 can best be described as “another one.” It’s just a slight variation of the story told in the first film, but with more pandas and magical chi used to try to differentiate the two.

The main theme at work here is that Po needs to learn how to be himself in order to defeat the bad guy. More interesting is what the film has to say about family, primarily coming with the introduction of Po’s birth father, which doesn’t exactly sit well with his adoptive dad (James Hong). Their entire subplot is perhaps the smartest thing in the entire franchise. After all, this is a series whose primary joke is that a fat panda knows kung fu.

Kung Fu Panda 3 doesn’t contain a lot of action, but what we get is pretty entertaining. The second film is still probably the best, but watching varying species of animals beat on each other is something that it would be hard to mess up. Still, this one adds in magical chi and a bull with jade blades on a chain, so that’s pretty fun. The animation on the whole is pretty solid. DreamWorks is one of the top animation studios for a reason; it puts out top-quality work, at least in the visual department. DreamWorks’ films usually lack subtlety and complexity, and that’s mostly true of Kung Fu Panda 3.

I guess at this point what I’d like is for the filmmakers to switch things up a bit. There’s little to this narrative and these characters that we haven’t seen before. Introducing Po to a bunch of other pandas should have provided some freshness, but mostly it just gave us different versions of Po, whom we’ve already gotten to know pretty well. That’s kind of the problem with all of DreamWorks’ animated work: by the time we get past the second installment, it starts to get stale. Shrek was good for the first two, but by the time we got to the third one, the act had grown tired. The same holds true with Madagascar. Kung Fu Panda 3 is, at least, decent – but if a fourth film is going to be made, the filmmakers are going to have to make some key changes.

Kung Fu Panda 3 can best be described as “another one.” It’s just a slight variation of the story told in the first film, but with more pandas and magical chi used to try to differentiate the two. The supporting cast is pushed aside for Jack Black, there isn’t a ton of action, and most of its themes are so obvious that even the child paying attention the least won’t miss them. But it’s pretty funny, it’s got some beautiful animation, the vocal work is solid, and it does contain a genuinely good subplot. It’s fine. It’s a step down from the second film, but it’s still perfectly serviceable, and it’s certainly better than the other “aimed at children” animated film currently in theaters.

Bottom Line: It’s a perfectly fine film, and if all you want is “more of the same,” it won’t disappoint.

Recommendation: If the kids want to go to the cinema, this is the one out right now to take them to.