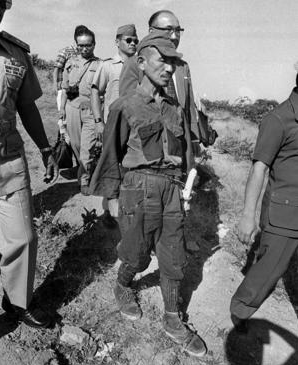 Lt. Hiroo Onoda spent three decades in the jungle before his war ended.

“You are absolutely forbidden to die by your own hand,” Intelligence Officer Lt. Hiroo Onoda was told by his commanding officer, Major Taniguchi, in 1944. “It may take three years, it may take five, but whatever happens, we’ll come back for you. Until then, so long as you have one soldier, you are to continue to lead him.” Onoda followed his orders to the letter, hiding in the Philippine jungle for over three decades. It wasn’t until 1974 that he was finally persuaded to surrender. Hiroo Onoda, faithful to the last, has died of heart failure, at the age of 91.

Onoda led three men when the allies arrived and recaptured the Philippines. They ignored all attempts to communicate, and dismissed messages from locals claiming the war was over. Even letters sent by relatives and newspapers, airdropped in the jungle, didn’t convince them. Onoda’s troops carried out guerrilla raids and sabotage missions as best they could, while subsisting on coconuts, green bananas and the occasional cow. They killed 30 people all told, and wounded close to a hundred.

In 1949, one of Onoda’s troops deserted and surrendered. In 1954 another was shot dead in a skirmish. Onoda’s last companion, Private Kinshichi Kozuka, was killed by police in 1972. He spent the next two years alone, before finally being tracked down by a college student, Norio Suzuki. Onoda told Suzuki that he would only give in if his former commander told him to.

At Suzuki’s request, Major Taniguchi returned to the island and told the faithful soldier that the war was over. He formally surrendered to President Ferdinand Marcos in 1974.

Onoda didn’t regret the time he lost. He spent his last years running nature camps for children across Japan. “I do everything twice as fast so I can make up for the 30 years,” Onoda said in a 1995 interview. “I wish someone could eat and sleep for me so I can work 24 hours a day.”