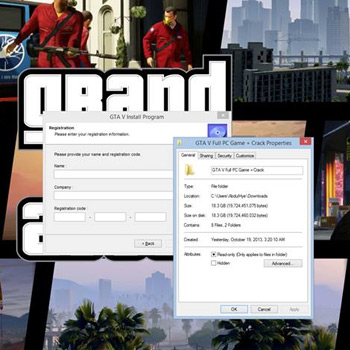 Rockstar hasn’t even announced a PC edition of Grand Theft Auto V, but that hasn’t stopped thousands of excitable gamers from attempting to pirate their very own copy.

Thousands of people have reportedly been infected by a piece of malware that’s dressed up like a PC version of Grand Theft Auto V. After installation, this malevolent little program will infect a computer and attempt to secretly collect personal information. Also, it probably forces gamers to question their basic decision-making skills.

At first glance, the package seems almost genuine. The file size is big enough to look legitimate, and the “developer” has even included a flashy installation screen. Once the game is installed, though, users are asked to fork over their personal info in order to “register,” and it quickly becomes clear that this isn’t a copy of GTA.

Perhaps more troubling, though, is the fact that most of the package, nearly 20 gigabytes, is comprised of unverifiable data. Those files could simply be filler, but there’s a very good chance that they contain even more malicious software.

Over 600,000 people have signed a change.org petition that politely asks Rockstar to consider porting GTA 5 over to the PC. So, this kind of machination isn’t exactly surprising. But the fact that so many people have already been tricked is a little depressing.

I’d also like to point out that Grand Theft Auto IV didn’t make its way to the Windows-based universe until seven months after it was released on the PlayStation 3 and Xbox 360. So, there’s a very good chance that Rockstar is planning a little surprise for PC owners. Until then, be patient.