When I kicked off my survey of world-building with the article “Let There Be Law” back in June, I discussed the importance of choosing a set of rules tailored to the genre and setting you want to run. I gave some recommendations of rules for different genres – RECON for Vietnam, Hard Nova II for space opera, and so on. I also mentioned that it’s possible to hack a rules set to support different genre conventions and settings, but didn’t go into much detail. Since that column, I’ve received a fair number of private messages asking further questions about modifying rules, and have been sent some really interesting rules and supplements that “hack” some popular games. This column, as we wrap up our survey of world-building, I thought I’d discuss some of these products and use them to illustrate how to hack the game rules to your taste. This article is going to assume familiarity with baseline Dungeons & Dragons and use that as a stepping off point.

The first product we’ll review is Lamentations of the Flame Princess: Weird Fantasy Role-Playing by James Edward Raggi IV. LotFP is a retro-clone of the classic Dungeons & Dragons role-playing game designed to simulate the “weird tale” of supernatural horror, associated with masters like H.P. Lovecraft, Clark Ashton Smith, and R.E. Howard. Supernatural horror is not a style commonly associated with classic D&D, but Lamentations makes it work beautifully – and is exceptionally illustrative of how one can adapt the game mechanics of a game to suit a particular theme or style of play.

LotFP is filled with subtle changes that transform D&D into something spookier. For instance, in Lamentations only fighters gain improved attack rolls as they level. The other classes get better skills and spells, but they never improve their odds in fighting. This deepens the specialized nature of each class, such that only by working together can the party survive. “Never split the party!” Moreover it changes the archetype of what each class represents – a cleric becomes more of a learned priest than mace-slugger, a magic-user becomes more akin to a sorcerer in a Conan story than Gandalf. And fighters are the war-hardened souls who learn from blood-letting.

LotFP also shines in its treatment of magic items. In LotFP, “all magic items are artifacts, and not mere tools or trinkets.” There are no magic items that merely improve game mechanics, and most, if not all, have drawbacks. An example (from one of LotFP’s adventures) is the ring of vanishing, which when worn makes the wearer invisible to everything except undead while attracting undead wandering monsters if any are nearby. This represents a subtle change that may not be immediately apparent in play, but over time implicates an entirely different setting and style – magic items change from “power ups” to items used at risk to life and soul.

Spells, too, receive subtle changes. For instance, Animate Dead has, in every version of D&D, created mindless skeleton and zombie servants. In LotFP, “the creatures retain faint memories of what life used to be, and their jealousy makes them destructive. They will always interpret any instructions in the most violent and destructive manner possible.” The clerical power to turn undead is itself a spell in LotfP and while the mechanic remains the same, it forces the cleric to actually choose between healing and turning, suggesting a more desperate setting where the powers of good and light are scarce. 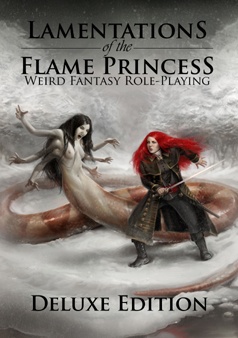 Yet for all that it changes, LotFP remains very close to D&D. It still has fighters, magic-users, clerics, thieves (“specialists”), the standard six attributes, hit points, and all the other trappings. Indeed, one can argue that it doesn’t go far enough – elves and dwarves are virtually never present in weird tales, but they are both available as player races in Lamentations, and it’s rare to see a wizard blasting fireballs or lightning bolts in Lovecraft or Howard, but both spells remain in easy reach of PC magic-users. This is almost certainly because players in RPGs like dwarves, elves, and fireballs. And this too, is illustrative: In adapting rules and making them your own, you sometimes need to be willing to compromise the purity of your setting in order to make a game that’s fun for your players.

In general, if you’ve enjoyed my columns, you’ll almost certainly enjoy what Raggi has done. His philosophy of game-mastering is even close kin to my own. For instance, in his introduction to Lamentations, he writes “player characters must have agency. They cannot be puppets or mere observers to events. The Referee is not telling a story, but presenting an environment and situations within that environment. The story is the summation of what happens during play.” The whole work is peppered with such gems; the three booklets that make up LoftFP probably include more and better advice on campaign creation and gamemastering than I’ve seen anywhere else in print. Anyone interested in weird fantasy, and any student of gamemastering in general, would be well advised to pick up a copy of Lamentations of the Flame Princess: Weird Fantasy Role-Playing. It’s almost like a magic item that offers a +3 bonus to gamemastering skill checks.

Check Out All His Majesty

The second product we’ll look at is The Majestic Wilderlands, published by Goodman Games and written by Rob Conley. (You might remember Mr. Conley from having graciously provided our readers with a free PDF of his Southland setting last column.)

The Majestic Wilderlands (TMW) is billed as “a supplement compatible with the Swords & Wizardry rules and all editions based on the original 1974 roleplaying game,” i.e. Dungeons & Dragons. TMW is an expansion of the Judges Guild’s Wilderlands of High Fantasy, which was the first campaign setting ever published for a fantasy RPG, and represents all the additions, modifications, and updates written by Conley over the course of 28 years of continuous play.

TMW includes about 85 pages of new rules, classes, spells, ritual magic, monsters, and magic items, and about 50 pages of setting, backstory, and maps. It serves as an excellent illustration of how you can start with a very simple set of rules (classic D&D is less than 100 pages long!) and over time build up a literal encyclopedia of material. Moreover, because the material in TMW has grown organically from actual play, it provides answers to common problems that real GMs face when running campaigns. Where do high-level NPC spellcasters come from, if they don’t adventure? How do all the spellcasters come together in guilds without magically charming each other? Why don’t the evil gods have paladins to champion evil causes? Why in 10,000 years of magical learning hasn’t anyone figured out how to cast simple spells without having to memorize them a day in advance? In short, “how do you make sense of all the nonsense?” TMW provides answers.

For starters, TMW adds ritual magic to the repertoire of all its spellcasters. D&D normally requires casters to prepare their spells in advance, but ritual magic lets the caster use any known spell at will by spending ten minutes and some material components. In the Wilderlands, most utility spells, like detecting magic and opening doors, are cast via rituals, while “prepared” spells and magic items represent an advanced form of magic used for battle. It’s a deceptively simple change, but it cascades throughout the setting. It provides a reasonable explanation as to why all those scrolls and magic items get made in the first place, for one thing, and it enables the introduction of several specialized spellcasting classes, such as Artificers and Rune Casters, which lack the ability to cast any spells at all – all their magic is ritual magic. 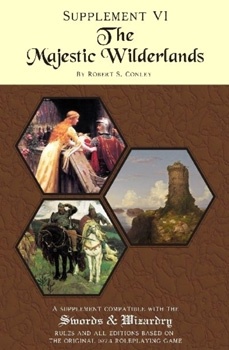 TMW also supplements its spellcasters with magical immunity, via shield spells taught by the wizardly and clerical orders (similar to parma magica in White Wolf’s Ars Magica, for you elitists out there). The “shield of magic” renders casters immune to any spell that directly affects the caster. Thus, mages can congregate with other mages knowing they are safe from magical harm. It’s a great mechanic that makes sense in the setting, and also makes game play richer – wizardly duels become a matter of attrition and indirect assault rather than a race to see who fails their saving throw v. death ray first.

Perhaps the most interesting mechanic in TMW is the addition of non-adventuring classes such as Craftsman, Priest, and Scholar. Each such class replaces the traditional “experience points per level” chart with a “years per level.” For instance, a Scholar with 25 years of experience is level 6 while a Craftsman with 25 years of experience is level 8. The non-adventuring class mechanic explains why most powerful wizards and priests are old – they’ve been hanging out in towers and temples, not plumbing the depths of the underdark. An adventurer, of course, who has survived 25 years is likely to be level 16 by then, but few adventurers survive that long. And a 6th level adventurer might be in his early 20s, which creates a great tension between the old masters who learned things the traditional way, and young upstarts who are delving into forbidden places to get ahead faster.

TWM also introduces possibly the cleanest skill system ever written for classic D&D-style games, fully integrated into its class system, not to mention a dozen new classes (such as Berserkers, Knights, and Merchant Adventurers), spectacular magic items like the sword Lionspirit, and lots of optional rules to add detail to combat and exploration.

TMW is not without its flaws, of course. The writing style sometimes jumps abruptly from in-world history of the Wilderlands to meta-game explanation of why the Wilderlands was designed that way; for instance, “…the success of these raids has caused nearly half o f the Skandian population to leave in order to colonize the newly won territories. This region is suited for roleplaying in the Viking homelands.” And the latter half of the book races somewhat breezily through much of the setting material, with sometimes only a paragraph offered where a page seems demanded.

But these are ultimately mere quibbles. As with Raggi, Conley has created the sort of work that any fan of this column would appreciate. The Majestic Wilderlands is a 5,000 gold piece gem of a supplement that any gamemaster contemplating a long-term fantasy campaign should check out.

Where Do We Go From Here?

Next column we’ll discuss the problems and pitfalls poised by players. There’ll be blood on our hands by the time we’re through. See you then.

Valve: Everything We Do Competes Against Half-Life 2