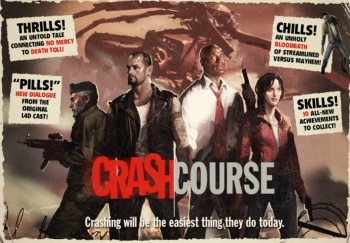 If Steam seems a little wonky, it might be because Valve released the Crash Course DLC for Left 4 Dead today, along with a couple of very solid zombie-killing bargains for the uninitiated.

The long-awaited Crash Course ties the No Mercy and Death Toll campaigns together with new single player and multiplayer action featuring Survival maps and a Co-op campaign. The focus, however, was on the add-on’s new streamlined Versus campaign, which lets players work through the complete experience in just a half-hour. Other changes include new dialog, ten new Achievements, a recharge timer for infected teammates and changed spawns for more balanced gameplay.

And what’s a DLC release without a hot three-day deal to go along with it? For those who haven’t already had the pleasure of struggling for survival against hordes of rampaging undead, Valve is offering Left 4 Dead and, for the generous folks in the crowd, the Left 4 Dead Four-Pack at half-price until October 2.

All this zombie-killing fun comes with a price, though, and some users are reporting that Steam is behaving a little oddly under all the strain. Your mileage may vary, but enough complaints about overloaded Steam servers are cropping up that wait times might be an issue for some of you. So be patient – the zombie apocalypse will be waiting when you get there!