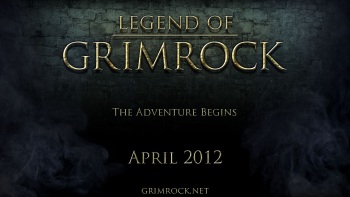 The old-school, party-based RPG Legend of Grimrock has [most of] a release date!

If you’ve been paying attention, you’ll know that I’m pretty wound up over Legend of Grimrock. It’s a hex-based RPG in the vein of Eye of the Beholder or Dungeon Master [or whatever your favorite game in the sub-genre may be], all gussied up with contemporary visuals and effects, and even a pile of achievements. And while there’s still work to be done, the game finally has a launch date, or at the very least a launch month, and it’s not too far away at all.

Legend of Grimrock will be out in early April, according to the latest update, preceded by a pre-order window that will open a few weeks prior to release. There’s still work to be done but the game itself is more or less finalized at this point. “We are certainly now starting to feel the pressure of the fast approaching release date which on one hand feels a really joyful moment but at the same time it’s a bit frightening because we have to stop polishing and adding cool stuff to the game we have learned to love so much,” the team wrote. “Legend of Grimrock is certainly a lot more personal project to us than other games we have worked on in the past and therefore it’s a bit sad to finally let our baby go out to the big world.”

Distribution details and other such information is still very hush-hush but a forum to discuss the impending launch is now up at Grimrock.net.