Korra faces off with Kuvira while Varrick builds a super-weapon. What could possibly go wrong?

We’re just about halfway through the last season of Legend of Korra, and the “The Battle of Zaofu” is the end result of Kuvira’s seizure of the Earth Kingdom Empire. When last episode left off, it was Suyin that broke the temporary truce between her city and Kuvira’s forces, and it’s down to Korra to clean up the mess. Meanwhile, Varrick and Bolin are forced to build weapons for the Earth Empire’s “Great Uniter”.

It’s another fantastic episode for Book Four, delivering brilliantly choreographed fight sequences, gorgeous music, hilarious jokes, and major story developments. All of that is used to support themes and dialogue that contradicts the “Nick” logo on screen. Seriously, if you’re not watching Legend of Korra: Book Four, you’re missing out on some of the best episodes of the LoK series and Avatar.

Korra carries herself differently now, reluctant to fight, but when no options are left, she’s ready to throw down with “a lot of pent up rage.” She’s definitely not Aang, but she is managing the responsibility of being the Avatar better than we might have predicted at the beginning of the series.

One of the best parts of this season is how carefully the writer’s are conveying Korra’s internal struggle. Instead of showing the audience what Korra is thinking, we are left to ask what’s going through her head. Disappointingly, it looked like the show was ready to move on from Korra’s physical and emotional recovery after removal of metal poison. By the end of this episode, though, it’s clear that Korra still has more work to do to overcome her trauma. 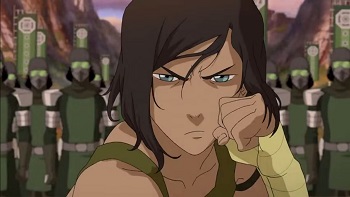 It’s standard protocol in Legend of Korra for the first fight between the Avatar and the season’s antagonist to go poorly for Korra. Still, that doesn’t prevent the first confrontation between Korra and Kuvira from being a fantastic fight sequence with a surprising conclusion.

First of all, this isn’t Book One Korra. After Suyin’s failed attempt to “take out” Kuvira during the truce between their forces, Korra is still committed to doing everything she can to find a peaceful solution. Second, this is the first time Korra has fought on this level since she took on Zaheer last season, and even then she was affected by that metal poison that was only recently fully removed.

“The only way you’re going to stop me from marching into Zaofu is if you physically stop me,” Kuvira says, goading Korra into a fight. After Korra reluctantly concedes this is the only way, the “Great Uniter” Kuvira chooses to take the Avatar on alone. Her confidence in her ability to take on Korra is persistent throughout the fight, even if Korra goes into the Avatar state.

See, even the Avatar, especially one that has been out of commission for three years, is going to have trouble standing up to someone who is a master of their own bending. Kuvira is surgical, precise and patient in combat, dodging Korra’s attacks with ease and delivering careful counter-strikes that wear Korra down. It’s a great sequence that features some amazing moves – Kuvira spinning the ground under Korra’s feet to throw her off balance was just brilliant. 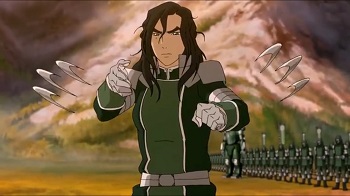 Seeing she’s outmatched, Korra enters the Avatar state, and watching her wield that power is exciting, but it’s presented in such a way that she’s a little frightening. She easily overwhelms Kuvira and raises a boulder to crush her, and for a moment it’s believable that Korra may kill her.

Three years earlier, when Korra was chained up by the Red Lotus and breathing fire, the resemblance to Azula was shocking. The ferocity she exhibited in her fight with Zaheer afterwards coupled with allusions to Azula told us one thing: Korra can be dangerous. And she likely saw the same in herself, and that dangerous side might be what manifested as the Shadow Korra earlier this season. The entity that terrified Korra and kept her from holding her own against simple thugs.

And Shadow Korra is exactly what she see’s as she is about to drop a boulder on Kuvira.

It looks like Korra isn’t fully recovered yet, as nearly killing Kuvira brought that vision back to her. Meanwhile, the shock of seeing the apparition takes Korra out of the fight, so the airbenders rescue her before Kuvira can kill her. Ultimately, Korra has lost and Zaofu has fallen to the Earth Empire. 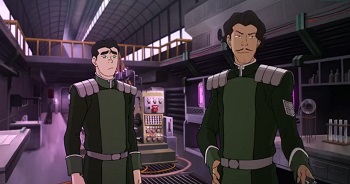 Not entirely a dramatic confrontation, “The Battle of Zaofu” pairs up Varrick and Bolin as Bataar Jr observes Varrick’s work to weaponize the spirit vines. Varrick is pretty smart and great at hiding his plans under his eccentricities, so it doesn’t take much to ensure Bolin stays by his side.

They’re a hilarious duo, as they’ve been in the past. Varrick keeps using his trademark, “Do the thing,” and Bolin, of course, never has any idea what “the thing” is. Where Meelo’s lines quickly become groan-inducing, Varrick, Bolin, and maybe even Zhu Li could probably make their own series work.

Varrick does the whole “build a bomb to negotiate my freedom” thing while working on the spirit vines, and it works to get rid of Bataar and all the Earth Empire guards. Knowing Varrick’s technical genius but emotional immaturity, it’s hard to tell if he’s actually built a bomb or was bluffing. At least, until he tells Bolin they’ve “had a good run.” Bolin’s not too shabby under pressure lately, and manages to escape the blast with Varrick.

Bataar reports to Kuvira that Varrick and Bolin have died, but he thinks he can replicate Varrick’s work with the help of Zhu Li. This seems like a perfect set-up for Zhu Li to wreak some havoc on Kuvira’s plans, but honestly after her split from Varrick last episode, I’m not convinced which side she’s on. It’s possible his attitude after their tender moment was the last straw for her, but it’s a question that will certainly be answered before the end of the series.

Judging by the comments on previous episodes, fans were a little disappointed that Korra’s whole internal struggle seemed resolved by the removal of the poison. It was building up to be a fantastic arc but had no real answer for the emotional struggle. I shared that concern, so it’s great to see that Korra’s still dealing with emotional fallout from years of conflict and what appears to be a struggle with her own capacity for violence.

I mean, it’s great as television. It’s not so great for Korra and everyone she cares about as Zaofu falls to the Earth Empire, Suyin’s family is mostly incarcerated, and Bataar Jr is now working to weaponize the spirit vines.

Bottom line: The first showdown between Kuvira and Korra is a fantastic fight, but the return of Shadow Korra is the biggest blow of the confrontation.

Recommendation: Definitely not an episode you can skip,”The Battle of Zaofu” is packed with excitement, jokes, and continuity.