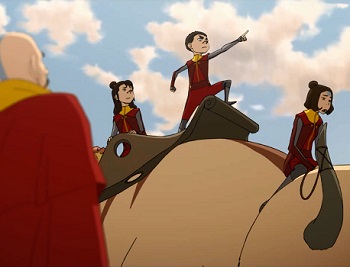 Mostly filler, “The Calling” sees the airbending kids go an an adventure just like their grandpa Aang.

With the world political state in turmoil after last week’s “The Coronation“, Tenzin has sent his airbending children Jinora, Ikki, and Meelo to find Avatar Korra. While largely a filler episode – most of its content is entirely extraneous to the series – there’s something charming about watching the grandchildren of Avatar Aang go on their own journey. The downside, however, is learning the hard way that Meelo is only fun in small doses.

The episode also addresses Korra’s struggle to resolve her emotional and physical trauma resulting from her confrontations with Zaheer last season, as well as the antagonists from the first two seasons. It’s been three years of healing for Korra, and four episodes for viewers, and with only nine episodes left in the series, the show may need to start getting into its final conflict soon. There are some concerns (and praise) for the Korra scenes in this episode, which are after the spoiler warning below.

“The Calling” gets props for its music, as the series often does. The theme that has played during Korra’s more important sequences this season has been perfect, and at this point just hearing it can stir up an emotional reaction. The heavy moments in Book Four are really landing, and the music is a huge part of that.

As mentioned earlier, Meelo is not fantastic in this episode, which is kind of bad because he has the majority of the dialogue (or maybe it just feels like that). He’s had a few ridiculous moments throughout Legend of Korra, and as silly as they might have been, he’s been a lovably goofy and occasionally badass character. Apparently Meelo a few times in a season is great, but ten minutes of his attitude in a single episode gets annoying very quickly. Sure, it’s all appropriate to the character, but he’s still annoying to watch after just a few lines.

Ultimately it’s forgivable though. As stated earlier, there are only nine episodes left in Legend of Korra. With a global conflict to resolve, the rest of Korra’s character development, and giving the series a proper send off, this episode could be the last one to feature the kids heavily. It’s nice to see them go on a little journey all on their own, and even if Meelo was aggravating in this episode, he’ll be missed after the end of the series.

Episodes of Legend of Korra: Book Four are released on Nick’s website on Friday mornings, with both of the previous episodes available to view now. The first two seasons are available on Amazon, with Book Three on Vudu.

Taking Jinora’s sky bison, Pepper, and a bag of food from their mother, Pema, the airbending kids head out into the world to find Korra. While Pema might be nervous about her children venturing out on their own, they remind her how young Aang was when he, Katara, and Sokka began their journey. While not an exact reflection of Avatar: The Last Airbender, they still travel, struggle, and work together.

Korra’s condition has left her without a spiritual connection, so Jinora hasn’t able to track her down via meditation. The kids become increasing frustrated, and Meelo’s self-centered attitude and warped vision of what their journey should be doesn’t help.

Ikki and Meelo haven’t had much screen time in LoK, so while Jinora spends most of the episode meditating, we get to see more of them. Meelo eats some poison berries, flirts with a young girl, and, apparently, is a fantastic artist. Ikki, who has never been a focus in the series, gets her moment to shine after being captured by earthbenders working for Kuvira. Talking about her family, the earthbenders end up encouraging her and giving her advice, just like when Aang discussed relationship problems with some intimidating prisoners in “Avatar Day“. She even casually removes herself from her bonds, just like her grandfather did many years before.

Ikki believes she has narrowed down Korra’s location to a swamp, but her brother and sister won’t follow through on her suspicions. Oddly, just as they decide to fly off, vines from the swamp grab them and pull them to the ground. The conflicts between the children – Jinora’s unsuccessful meditation, Meelo’s attitude, and Ikki “not pulling her weight” – all get resolved by the end with the kids recognizing each of their contributions. It wraps up this “filler” story, and gives us a little tale by which to remember the kids.

Toph has given up helping Korra and sends her out for food, but the mystical swamp causes her to flash back to her battles with Amon, Unalaq, and Zaheer. Toph finds Korra moping and admits that she knew the swamp might cause Korra to see have those flashbacks and tells her the swamp is trying to help the Avatar get better. 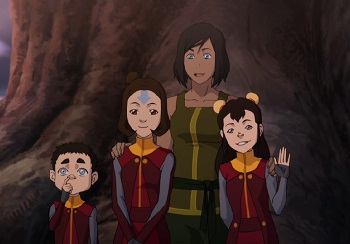 “You can’t expect to fight your future enemies if you’re still fighting the old ones,” Toph says, and she takes Korra to the banyan-grove tree (from ATLA). There, just as Aang had done, Korra touches the roots of the tree that connects the entire swamp, which has a strong connection to the spirits. Korra suddenly can see the airbending kids searching for her, just as Jinora can now sense Korra. They reunite and Toph meets her old friend’s children.

Toph makes Korra metalbend the last of the Red Lotus’ poison from her body. It’s only a small amount, but it was enough to keep Korra from reaching the Avatar State. It’s a quick resolution to her physical ailment, which is why I hope the show will continue to explore the emotional trauma Korra was dealing with, but as she is “bringing balance to the world.”

This might have seen the last of Toph on Legend of Korra. While a perfectly acceptable side-story, fans were hopeful to see the Blind Bandit throw down with some of the antagonists from Book Four. Even if she is done, it was nice to see Toph Beifong again, and her subtle compassion for Korra – such as lightly hugging the Avatar back – was a nice touch. Any sympathetic advice and guidance from Toph would have been unbelievable, so a few words of wisdom wrapped in insults and sass worked well for the character.

The episode continued to drop hints about Kuvira’s domination of the Earth Empire, including giant signs featuring her face in town and a mention of forces amassing to take the metalbending city of Zaofu. This emotional journey of Korra’s has been fantastic, but I’m eager to see the series get into some action in the next couple episodes.

Bottom line: Meelo is annoying, sure, but if this episode is the last real story involving Tenzin’s kids, it’s a satisfying tale.

Recommendation: Aside from the few scenes featuring Korra and Toph, “The Calling” doesn’t offer much that you need to see, unless you just love the airbending kids.

Microsoft’s Phil Spencer Not Sure if Minecraft Sequel Makes Sense