Korra reunites with Asami and Mako for one last show.

After the “Battle of Zaofu,” Korra heads back to Republic City and meets up with her old friends, Mako and Asami, while Bolin and Varrick make their way out of Kuvira’s Earth Empire.

“Reunion” is a simple episode, which helps to pace the major moments of the season. The main story of the episode wraps up with a lesson, giving this episode the feeling it was meant more for the younger Legend of Korra audience. Dedicating nearly half the episode to the comedic relationship between Bolin and Varrick definitely contributes to this being one of the lighter episodes of the season.

This doesn’t mean the episode is entirely without significance. Korra uses one of her new skills to resolve the episode’s conflict, plus she has an awesome new Water Tribe style outfit. Prince Wu’s plot has been inched along and hopefully he will remain tucked away for the remainder of the season. Also, “Reunion” has a huge development at the end that hints at something exciting in the coming episodes. There are no brakes on this hype train now.

The action in Republic City is limited to a few bending moves and a short car chase, but out in the Earth Empire, Bolin shows off what he is capable of doing with earth and lavabending. None of what we see is brand new, but Bolin is able to hold his own against unfavorable odds and it’s a blast to watch. Most rewarding is that both he and Varrick get to do what matters most to them both: helping people and science, respectively.

Like I said, it’s a fairly straightforward episode that is perfectly enjoyable. Any further discussion will head into spoiler territory, so if you want to watch the episode first, head over to Nick’s website, where new episodes of Legend of Korra: Book Four are released on Friday mornings. All of the previous episodes available to view there, and the first two seasons are available on Amazon, with Book Three on Vudu. 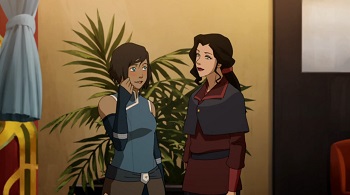 The Korrasami fans won’t let us forget this.

Korra returns to Republic City disappointed in her failure to defeat Kuvira at Zaofu, but she’s supported by those closest to her. After getting her fantastic new outfit (the character designs in Avatar and Korra have always been great) she meets up with her friends Asami and Mako. Her reunion with Asami also leads to some blushing when Korra is complimented for her new hair. The creators appreciate that there is a vocal contingent of Korrasami shippers, so it’s a nice nod to them.

Her reunion with Mako is less exciting, but as all three settle in (with unexpected guest Prince Wu), things start to get shaky. It might be easy to be frustrated with Korra’s friends for criticizing Korra being gone for so long, but she was gone for longer than she even knew Mako, Bolin, and Asami. Adding in she lied about her whereabouts for the last six months or so and that she only wrote to Asami, and her friends’ frustration is a bit more understandable.

After Wu is kidnapped by some benders from the Earth Empire, Korra uses the spirit vines spread throughout Republic City to find them, a trick she learned from Toph in the swamp. After rescuing Wu from a train, the group reconciles their differences and admit that after so long it makes sense they would need a moment to fall back into their old friendships.

Wu gets dropped off at Asami’s home, where Mako and Bolin’s family has been residing for three years, and it’s a perfect match considering the dedication Mako’s grandmother had for the Earth Queen. And now that Korra is back with Asami and Mako, we might start the run to the final confrontation with Kuvira and the end of the series. 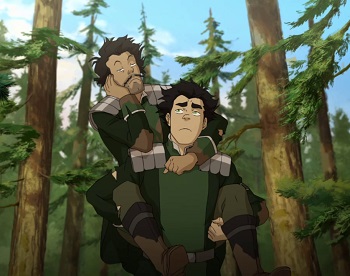 Bolin and Varrick need their own show.

The world of Avatar is pretty much certainly finished after Korra is over, but Bolin and Varrick are so good together, it’s kind of a shame we have no hope of a series or something for these two. Making their way through the Earth Empire, they run into some refugees from one of Kuvira’s reeducation camps. Their revelation that the camps are actually prisons for dissenters and those who aren’t natives of the Earth Empire is sobering for Bolin, who contributed to building the Empire with the hope that he was helping people.

Luckily, by the end of “Reunion” he gets to help the refugees. After Varrick and Bolin fail to get the group through an Empire check point, a fight breaks out. While a rather simple fight scene for this series, it’s a fantastic exhibition of Bolin’s skills as a fighter. He manages to pull off some great stuff and handle three of Kuvira’s mecha tanks while Varrick uses his skills as an engineer to shut them down. After Varrick Tony Stark’s a way for he and Bolin to escape, Bolin turns around and saves the refugees, later apologizing to them for what the Earth Empire has done.

At the very end of the episode, we see Kuvira ordering a group to chop up and collect the spirit vines of the banyan-grove tree in the swamp. The very swamp where Toph Beifong has been hiding out in. The swamp that Toph is constantly connected to in entirety. It looks like her story isn’t over and we may actually will see the Blind Bandit throw down in the final season of Legend of Korra.

Bottom line: A simple episode that plays out perfectly well and paces the season for the final run to the end.

Recommendation: This isn’t a crucial episode so you can skip it if you like, but I doubt anyone keeping up at this point is skipping anything.

Constantine Gets Very Dark, But Not Quite Dark Enough