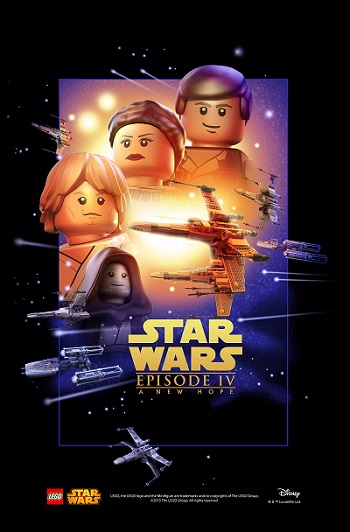 The LEGO Group has created a series of posters taking the imagery of Drew Struzan’s movie posters and giving them a LEGO spin.

While I’m sure that there are some out there who are sick and tired of LEGO’s line of Star Wars products, I’m one of those people who literally can’t seem to get enough of them. Every time the toy maker comes out with something new related to the franchise, my inner-child starts doing cartwheels like he just wrapped up an Easter basket sugar bender.

That in mind, you can perhaps understand my excitement when I caught sight of a new set of movie posters the LEGO Group has produced for this year’s upcoming Star Wars Celebration event. Modeled after Drew Struzan’s poster designs for the prequel films and Special Editions, the posters take the imagery from the posters and basically just replace it all with the LEGO equivalent. Actors become mini-figures, starships become LEGO starships, Yoda becomes LEGO Yoda, etc. Struzan’s gorgeous posters, of course, were probably one of things Star Wars fans, by-and-large, actually liked about the prequels and Special Editions. LEGO’s brick-based posters, in turn, are both accurate recreations and charming in that special way that only LEGO products really are.

If you’d like to get your hands on one of these posters, you merely need to attend next week’s Celebration festivities in Anaheim, California where LEGO will be giving them out. While tickets are almost sold out, it’s not too late to grab some. The Celebration itself will run from April 16th to the 19th. If you can’t make it, LEGO will also be releasing the posters to its online storefront and at LEGO brand retailer one-by-one over the next few months. It plans to begin with the poster for A New Hope on May 4th.