On Sunday I saw a movie called Let the Right One In, and it’s lingered with me over the past few days. It’s an affecting movie. Maybe not perfect, but in the pantheon of horror movies and in the smaller subset (although it sometimes feels larger) of vampire movies it stands alone. A Swedish film, Let the Right One In is about the relationship between two social outcasts: one, a 12 year old boy, the other a vampire girl who is “12 years old, more or less.” Part horror film, part coming of age tale, it’s absolutely worth your time, although it’s not for the squeamish viewer. For me, it has also served as a point of comparison for just how far videogames have come over the past few years. The advancements I’m referring to are spread over a wide catalog of games, none of them perfect, but all of them significant and in some way resembling the best of what this movie has to offer.

It’s good to get perspective on things, especially when you engulf yourself in one medium for a living. And I think one thing that’s so appealing about this movie, and one reason it’s stayed with me, is that at first glance it feels far away from the medium of videogames. This is odd, because as a genre I think the horror film experience translates well into the videogame medium. They can both maintain a similar kinetic rhythm of build ups to intense action, have fantastic imagery and a general aim in provoking a fight or flight response from viewers.

Almost as an affront to the genre, Let the Right One In has a tendency towards stillness; it lacks the standard jump out of your seat moments associated with horror films. But, in case you’re thinking this movie is a melodrama, it keeps one foot firmly in the horror movie tradition as it juxtaposes the mundane with the horrific, the banal and the fantastic. It’s a difficult direction, not necessarily in using the contrasts to shock, but in making the two separate worlds of horror and verisimilitude feel real when they’re held up next to each other. The film is also able to reconcile these two contrasts in a way that never sat easily with me.

Let the Right One In relies a lot on exposition to tell its story. The camera moves slowly or not at all across dull Swedish landscapes rendered lifeless by snow, unfortunate architecture and some of the blander colors associated with the 80’s, the time in which the film is set. Even the scenes of violence are captured by a still camera that doesn’t try to edit the viewer into some kind of emotional frenzy. You are, in this movie, an observer instead of a thrill-rider.

And finally it is, like horror movies, and to a lesser extent videogames, very much focused on the physical, both in terms of body horror and in the sense that body language carries so much of the story. But the story that’s being told with the character’s bodies is a subtle one that focuses on the intricacies of rejection, isolation, ages and emotions. Surely it was dumb luck that allowed the filmmakers to find the one child actress capable of portraying both innocence and antiquity. But what can videogames learn from this film? 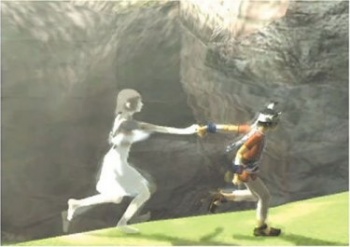 I’m not actually sure they need to learn anything because, when I started thinking about it, I realized games are already doing a lot of the things Let The Right One In does so well; they just aren’t doing them all in the same game. Open world games are both unwittingly and consciously starting to provide players with a more advanced sense of exposition. When I walked out of the bunker in S.T.A.L.K.E.R. Shadow of Chernobyl, with only a pair of binoculars, the first thing I did was to stop and scope out my surroundings. I took in the Stalker camp and finally put the binoculars to my eyes before spotting a mutant pig truffling around in the grass. I watched it for a minute or so and then moved onto the camp, feeling out of place and totally immersed.

After seeing the Mass Effect 2 trailer, I was reminded of how subtle the facial animations of the characters in the first game were. It was a game that put the reliance on exaggeration and iconographic poses to the wayside in favor of true close ups. Games were finally being instilled with a sense of real and not merely imagined drama. And as I watched the video for TRICO, real or not, I recalled Ico and how carefully those characters’ body animations conveyed a story in the absence of any real dialogue. The act of Ico pulling Yorda along suggested a first step towards the more subtle distances and positioning of bodies that make a movie like Let the Right One In so interesting.

Finally there is juxtaposition of horror and daily life, a feat that I think only Grand Theft Auto IV has come close depicting. Without going too deeply into a discussion of the effectiveness of violence in GTA IV, I will say that for me, killing the first civilian wasn’t the easiest choice I’ve ever made in a game. Taking my character beyond the scope of crime lords killing crime lords was a kind of horror film moment in a city that resembled, on a superficial level, the real one I live in.

I’m not suggesting Let the Right One In is ripe for a videogame adaptation. I’m not sure it would ever make for a satisfying videogame. The characters and their stories are too personal, too carefully crafted, to work into the looser framework of storytelling that videogames use. For me, the movie served as a reality check, a wake-up call. Because even though I take in plenty of other media, lately I’ve started thinking about games only in terms of other games. It is a kind of resignation to the fact that games can’t be movies, so why even bother to compare. Games aren’t movies, but in comparing my experiences with them over the past two years with one very good film, I’ve found that there are more similarities than the cynic in me thought there would be. Of course, if you take my recommendation and see this film, you may not consider any of that at all, as you find yourself engrossed in its haunting story and images for days to come.

Tom Endo is pretty sure he knew at least one vampire in grade school.