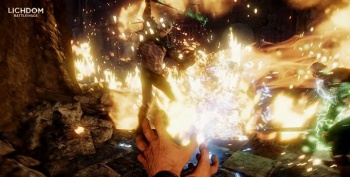 Xaviant hasn’t been around for that long, but you might be impressed with its first attempt, Lichdom: Battlemage, described by Xaviant as a “first-person caster,” and living up to that title unambiguously. Crafting spells is at the heart of the game, with virtually everything you experience hinging largely on your ability to craft the right spell for any given circumstance. Of course, casting those spells is only slightly less important, as you’ll need to take down scores of enemies, giant hulking demons, as well as mini-bosses along the way. Lichdom has some troubles with its learning curve, and there’s a good chance you’ll spend a long while trying to clear the first boss of the game, but once you get the hang of it, you’ll be lobbing fireballs, calling down lightning storms on your foes from a safe distance, and blinking your way out of danger when it comes your way.

Even starting out, the spell crafting system is a tad on the complicated side – there are literally millions of potential spells you can create from the 156 base spell types – so you’ll do well to read up online, or check out the in-game tutorial videos to sort out exactly what you’re doing before you waste all your crafting materials. You’ll have up to three active elements of eight total elements available in the game, and three types of spells active for each element at any given time; Targeted, AOE, and Nova. When crafting a Targeted Fire spell, for example, you’ll probably want to have a Destruction attunement handy, to maximize burst damage, as well as one of the spell “shapes,” like “Ray” which does a steady stream of damage to enemies directly in front of you. More advanced spells will have multiple slots for modifications, allowing you to min/max or make well-rounded spells, depending on your needs.

There are three ways to cast spells of a given element as well. Left-clicking will launch your equipped targeted spell, and holding left and right mouse buttons will charge up your AOE, with a visible circle on the ground for targeting, as well as animations to let you know when it’s fully charged. Finally, right-clicking will block an attack, and timing a block perfectly will release your third spell type, the Nova, hitting all nearby enemies. Depending on the type of shield you have equipped, you’ll be able to quick-blink or charge blink (or both) with the space bar. Quick blink is a spammable evasion tool, while the charge blink is more offensive, releasing a nova wherever you appear. Despite the focus on Blocking in the game, I found that blinking to avoid attacks was much more effective than trying to time blocks perfectly. They can’t hit you if you’re not there, after all.

There’s only one difficulty setting in Lichdom, which is one major flaw in the design of the game. With some segments going upwards of 10 or 15 minutes without a checkpoint, as well as some of the eight boss fights taking similarly long to attempt, failing a couple of times in a row is incredibly frustrating, and, without a difficulty setting, there’s literally nothing you can do except try to play more effectively. Once you’ve memorized every enemy spawn location and their patterns, it’s usually not too hard to get through, but when a crossbow-wielding cultist literally appears out of thin air on top of a ledge and insta-kills you after working arduously for 15 minutes to get through the preceding dozen or so mobs, well, suffice to say, it’s not as much fun as it could be.

Despite the difficulty of some bosses and game segments, the gameplay itself is spectacular. Combat is refreshingly fast-paced, without resorting to mechanics like one hit kills and the like. While blocking may be the preferred approach to not dying, I still find blinking around the area to be preferable to trying to time blocks, and the maneuverability this imparts on your character is profoundly game changing. Having used the charge blink for some time, switching back to the quick blink was like night and day for survivability. It’s also got great applications for flanking enemies around obstacles, so it’s not entirely defensive. The entire combat system – spamming blink, charging auto-crits with your targeted spells, and laying down AOE effects for your enemies to wander into – is thrilling. Add to that the fact that you have the ability to craft your own arsenal of spells, and you’ve got a truly customizable gameplay experience. I was using a “Lob” style fireball spell for a while, until I found a spell component that added a bonus to Homing for missiles, so I created a new missile spell, and haven’t looked back since.

Lichdom: Battlemage tells an incredibly linear story, but does it in a fairly novel way, with most of the cinematics being shown in-game, and triggered optionally by activating purple rifts in the world. They’ll show you a little glimpse of something that’s happened in the area, offering some background and context for the zones you’re playing through. It’s not an open world by any stretch, and most of your wandering will be minor branches off the path to collect a piece of loot or recharge your shield after a tough fight. Otherwise, you’re just walking along the predetermined paths, killing all the bad guys you see along the way. There are 15 different enemy types in game, ranging from casters to melee to crossbow skeletons, more than enough variety to keep you on your toes, as well as keep you guessing what’ll come next.

Bottom Line: With an remarkably robust spell crafting system and spectacularly entertaining combat, Lichdom: Battlemage finally brings the glory to the magic user that it has long deserved. Creating your own options for how to play lends depth and complexity to the game as a whole, and lets you tailor the experience to literally any style of combat you want: stand far away and lob fireballs, or use charge blink to rush into the fray, unleashing novas along the way, and using your wits to keep yourself alive.

Recommendation: With only one difficulty level, Lichdom: Battlemage is not designed for below-average players. If you’re particularly untalented with shooters, it’s probably best to give this a miss, since you’ll probably get frustrated and quit very early in the game. Anybody with average skills or higher, however, will enjoy the tailored gameplay and the challenge Lichdom presents at virtually every corner.

This Custom Xbox One Turns The Console Into a Laptop