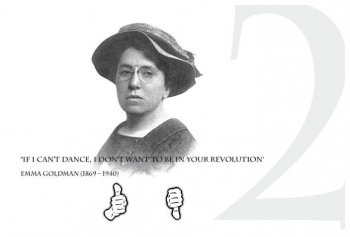 Lionhead’s countdown started last Thursday, with the number “6” appearing next to the image (and quote) of famous South American revolutionary Che Guevara. On Friday, we got French Revolution mastermind Maximilien Robespierre as #5. Now, over the weekend, the site went through #4, #3, and #2:

Numero Quatro was good ol’ “Honest” Abe Lincoln – an odd choice, to be sure, since he wasn’t known so much for instigating a revolution as he was for suppressing one. Quoteth Lincoln: “Be not deceived. Revolutions do not go backward.”

Number Three was famous Greek philosopher Aristotle. Now, Aristotle isn’t really known for being a famous revolutionary (at least not in the sense of a rebel against an established dominion) – but one could certainly call his ideas and philosophy revolutionary. Aristotle was the tutor of famed conqueror Alexander the Great, and his quote reflects this: “He who is to be a good ruler, must have first been ruled.”

Today’s revolutionary – Number Two, for those of you keeping track at home – is Emma Goldman. This is a strange pick, since Goldman isn’t nearly as well known as the company she keeps on the list. Still, if Wikipedia is to be believed, she certainly fits the bill, as a prominent figure in the anarchist movement in the early 1900s. “If I can’t dance, I don’t want to be in your revolution.”

We’re left wondering who will be tomorrow’s #1 revolutionary (my money is on either Lenin or the big J.Christ, depending on how pretentious Molyneux feels like getting), as well as “what the hell this is all counting down to?” Members of our community have guessed Fable 3, but announcing a sequel is hardly revolutionary, even by Lionhead’s standards. Project Milo would have fit, if we hadn’t seen it at E3.

I guess we’ll just have to wait and find out Wednesday at GamesCom.