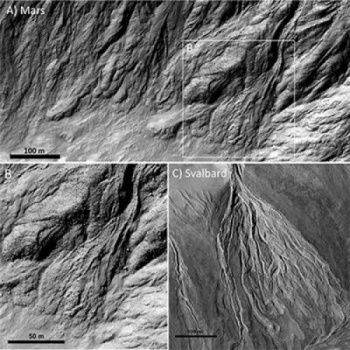 New research suggests that liquid water may have existed on the surface of Mars as early as 200,000 years ago.

For a long time, features on Mars’ surface have led scientists to speculate that liquid water existed on the planet’s surface in the past, and further lines of evidence have reinforced this belief. According to new research, liquid water may have existed on the red planet as recently as 200,000 years ago, based on studies of a crater in Mars’ southern hemisphere.

The results of the study, published in the international scientific journal Icarus, point to well-preserved gullies and debris from flow deposits in the crater as evidence of the action of liquid water. Co-author Andreas Johnsson and his team compared the Martian landforms with those in Svalbard, a Norwegian archipelago, to arrive at this conclusion.

“Our fieldwork on Svalbard confirmed our interpretation of the Martian deposits. What surprised us was that the crater in which these debris flows have formed is so young,” says Johnsson.

Johnsson and his team determined that the crater is approximately 200,000 years old, which means that any gullies and flow deposits could not have formed any earlier than this. The most recent proposed ice age on Mars ended around 400,000 years ago, which means that the features the team examined were not formed by the melting at the end of that ice age.

Johnsson speculates that the water was formed from the melting of snow packs, when conditions on Mars were favorable for snow formation. “This is possible,” he says, “since the orbital axis of Mars was more tilted in the past than it is today.

Spielberg to Direct Adaptation of Roald Dahl’s The BFG