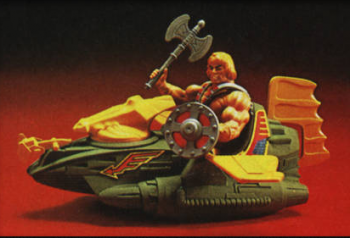 By the power of Tonto’s bird hat?

If you’re a die-hard fan of Masters of the Universe – and yes, it is the one you think it is, Grayskull and all – then you may already have been aware there’s a movie in the works. But until now you won’t have known who’s going to write it: Terry Rossio, co-writer of that blockbuster Western, The Lone Ranger. Look on his works, ye mighty, and despair? Possibly, but don’t hold your breath waiting for this one to come out; it hasn’t got a director yet, having lost Jon M. Chu of G.I. Joe: Retaliation fame.

Rossio’s done the action thing once or twice before, more often than not in movies that involve Johnny Depp in some capacity. He’s the man to go to for Pirates of the Carribbean trivia, as he’s had his hand in Book of Secrets, At World’s End, Dead Man’s Chest, The Curse of the Black Pearl, On Stranger Tides, the video game, Tales of the Code: Wedlocked, and the upcoming Dead Men Tell No Tales. The Masters of the Universe has already gone through three other writers at this point, and the departure of Chu with no replacement in sight means yet another delay for the movie.

Will you see Eternia on the big screen? Maybe, and if you do, you may have Rossio to thank, but there’s no way to know when that’s going to happen. At least not yet.