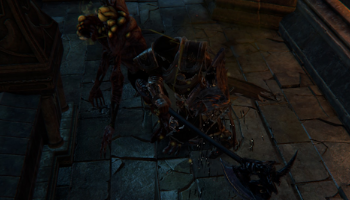 It’s practically impossible not to mention Dark Souls when talking about Deck 13’s Lords of the Fallen, predominantly because the latter is one of the most shameless imitations of the former you could ever hope to see. From the progress structure, to the attempted strategic combat, to the near-identical control scheme, Deck 13 doesn’t even try to hide that it’s playing From Software’s song, and it’s quite clear that the studio isn’t exactly sure how to replicate the Souls games’ innate allure.

If I’m to be brutally honest, I’d have to say Lords of the Fallen is a noticeably inferior copy of Demon’s/Dark Souls. However, inferiority in comparison to one of the most accomplished action role-playing games in the business does not mean the game is inherently bad. Despite missing the point of the games it apes, and flying in the face of some highly questionable design decisions, Lords of the Fallen manages to be an engrossing, entertaining experience.

You start the adventure with very little background and some inefficient tutorials. The main character is an ex-convict who is fighting some things collectively called the Rhogar, who are demons or something, and that’s about all the plot worth covering. There are NPCs, though talking to them is like joining a conversation halfway through – they know and care what’s going on, but you, as the player, lack sufficient information to join them. From then on, it’s gothic hallways and grim corridors, as players dodge, block, counter, and circle an army of enemies so spiky and overdesigned you’d think a younger Todd McFarlane birthed them.

Almost all descriptions of gameplay could begin with the phrase, “As with Dark Souls.” Fallen attempts to be every bit as tense as its surrogate forebear, with enemies that slice off large amounts of health, an energy meter that governs blocking, rolling, and attacking, and a firm focus on slow, methodical, tactical fighting. During the opening chapters, the game succeeds somewhat in delivering a Souls-esque experience. The first boss is a dominating, intimidating prospect, wielding a giant sword and shield that require careful navigating and timing to overcome. For a good while, one is made to feel cautious and even a little paranoid, with encounters requiring patience and pragmatism.

There are problems from the outset, even in the face of such promise. Environments are composed of a huge amount of tiny corridors, often littered with oversized enemies, and the camera becomes a nightmare as it tries and fails to focus on the action. The lock-on system is awkward, regularly focusing on the wrong enemy and sometimes refusing to switch to other monsters for no discernible reason. The game is clunky and often glitchy – Rhogar are fond of disappearing and reappearing as if the game forgot to render them, animations can fail to trigger properly (especially anything involving monsters grabbing the player), and players can even fall through walls. The whole game has a rough, janky feel to it, the sort of thing one finds charming when it’s not infuriating.

Despite all the sloppiness, Lords of the Fallen manages to retain its appeal. Tweaking the death system of Dark Souls, players rack up a kill streak as they slay a successive amount of Rhorgar. Each combatant put down is worth experience, which can be spent at save points dotted throughout the world. However, using a save point to spend XP or record progress resets the kill streak, and one needs a high kill streak in order to coax better loot drops from enemies. If you die, you’ll leave behind a ghost where you fell, and will need to collect it to retain your experience. Take too long, or die again, and it’s lost forever. It’s a fun balancing act of risk and reward, as players choose between banking their earnings and staying safe, or see how far they can go without losing it. Some of this is mitigated, however, by the fact it’s easy to grind, and one can return to previous areas to beat up on weaker enemies.

That latter issue becomes harder to ignore as the game continues. See, while Lords of the Fallen starts off every bit as unyielding as Dark Souls, the right combination of equipment and character building can turn things into a cakewalk. At character creation, I gave my guy the “Cleric” spell set, which allows me to regenerate health, raise defense, reflect damage, or slow down enemies, all with a constantly refreshing mana pool. Though the slow casting time makes using them in battle a little tricky, a bit of leveling allowed me to spam these spells recklessly, and once I found a sword that balanced damage and attack speed in just the way I needed, the game suddenly went from slow-paced intensity to a big dumb hack n’ slash. It doesn’t help that I accidentally completed a dungeon out of order, something designed for above my level, and after chewing through a boss that I wasn’t supposed to fight yet (it did, admittedly, put up stiff resistance), the rest of the game’s opposition was pitiful. 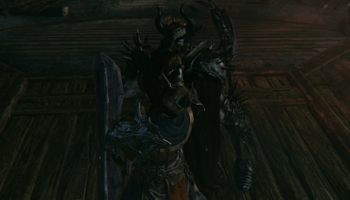 Lords of the Fallen never quite nails balance. When it’s at its toughest, it’s relying on cheap tricks to feign difficulty. Despite the game claiming that enemies are subject to all the same rules as the player, they’re not. They may power through and break all your attack animations, and while their ability to block isn’t unlimited, their stamina is unreasonably high and they get to always face you, meaning you struggle to ever get behind the bastards. When it’s not pulling out all the dirty stops to be challenging, it can be shockingly easy.

Again, however, other games are emulated to provide more of a fight. You can choose to go without armor, and there are equipment/spell packages at character creation that aren’t as easily abused. Warrior and Rogue types employ high damage or nimble, obfuscating powers, and there are optional challenges throughout the game to keep things spicy. In addition, there’s both a New Game + and a New Game ++ at completion, giving you a tougher run each time.

Lords of the Fallen is a weird little prospect. On paper, nothing about it sounds good. It’s brazenly derivative, technically clumsy, and its difficulty balance is all over the place. It violates its “tough but fair” rules to maintain the “tough” side of things, and when it doesn’t do that, it degenerates into a mindless brawler. Yet in spite of itself, it’s entertaining. I loved going through the Warhammer-flavored hallways, feeling increasingly more dangerous, with the desire to overcome and preponderate initially onerous opponent providing plenty of motivation.

Not to mention, there’s something delightful in just how ridiculous it all is. The imbalance can be its own satisfaction, as the night-and-day difference between hard and easy lets you go and thoroughly bully something that used to give you a lot of trouble. Likewise, the overly grimdark art direction and general tone is hilarious. There are weapons with names like Rotten, Butcher, and Bloodsick. Bloodsick! What could “bloodsick” even refer to? Is it a puddle of sick full of blood, or someone sicking up blood, or is it someone whose veins are full of sick instead of blood? Married to the Games Workshop, intricately spiky, endlessly angsty art direction, there’s a lot of unintentional – but nonetheless funny – humor to be found.

Lords of the Fallen has all the stuff needed to be a truly great game. Despite not nailing the point of Dark Souls, it manages to hold its own as a Souls-lite production for a good portion of its running time. The desire to progress is effectively coercive, and there are some legitimately grueling boss fights on offer. Its overall grunginess, as well as the other aforementioned issues, stop it from achieving its potential, but what can I say? I don’t dislike this, even if I really should. It’s doing something right.

Bottom Line: Lords of the Fallen, a shameless and sloppy copy of Dark Souls, shouldn’t be as enjoyable as it is. Somehow, through all its imbalance and oddity, it remains a surprising amount of fun, even if its propensity to make the player laugh is a sheer accident.

Recommendation: If you’re hoping for another Souls experience, this is too tepid an offering to satisfying. That said, it’s still worth playing if you want an amusing, silly bit of action.

Facebook: Oculus Will Become a Meaningful Platform in Many Years