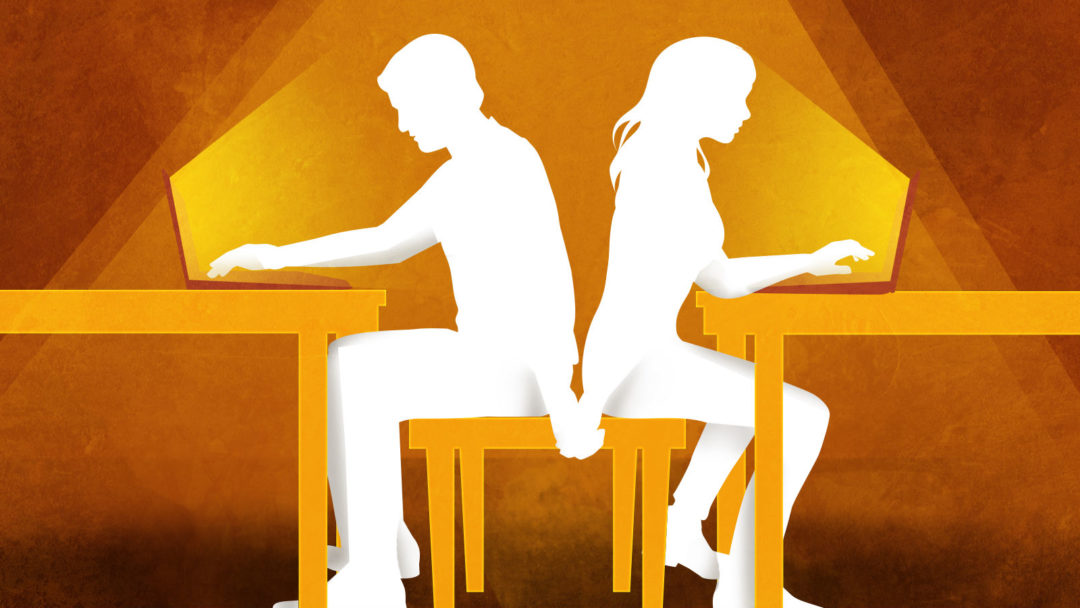 Anne Alanko was working as a psychology researcher at the University of Jyväskylä in Finland, joining a team of researchers to create GraphoGame, an educational game that helps teach dyslexic children how to read. The university hired Ville Mönkkönen, a software developer, as a contractor to help Anne and her team. At a certain point, their colleagues started wondering why Ville stuck around so long after his actual working hours, when his coding responsibilities for the day were already done. Then Ville and Anne started dating and kept seeing each other long after their gig at the university was over. They moved in together and got married. Today they have three kids, ages 10, 8, and 2. Their story is tailor-made for some late-Millennial version of a classic love song.

But they added one verse to it that no singer-songwriter has considered as romantic side story yet: after four years together, they made their own video game as a couple. Their adventure RPG Driftmoon was released in 2013. Its graphics are crude, but it was a well-loved game in its day. Reviewers enjoyed the fact that you could circumvent most combat through dialogue.

“Ville was already working on the early stages of the game when we met,” said Anne Mönkkönen. “Well, a very early version of it,” her husband Ville Mönkkönen retorted. “It changed dramatically once Anne stepped in. I was more into the hard RPG stuff, the mechanics of it. Anne’s involvement brought a much-needed dose of accessibility and humanity into the game.”

Samantha Davenport and Alex Barrett met a few years ago at a fan convention for the animated TV series My Little Pony in Savannah, Georgia,. They got engaged four years after that, with Samantha already taking Alex’s last name. “We found lots of common ground immediately,” Samantha said. “She was the first person I came out to as transgender; we met around the time when Alex was preparing for reassignment surgery. But that wasn’t the determining factor. It’s primarily in our love of silliness that we found each other. We both regard being silly as an important value in life.”

“Silly” would be just the right word to describe Squidlit, the video game they developed together over the course of more than a year and released in early 2018. A walking squid stars in the 2D platforming title for PC, which looks like a game made about 30 years ago for Nintendo’s first Game Boy handheld console.

Alex made a living through a retail job before quitting that position to work on Squidlit full-time, while Samantha studied for a degree in Game Art & Design. They fleshed out a detailed backstory for their game, and went on to design and create the whole thing together. Samantha wrote most of the story and created the lore behind what players see on screen. Alex taught herself how to code, draw rudimentary pixel graphics, and create chiptune music on an actual Game Boy, She got the exact Game Boy screen resolution right — Squidlit runs at precisely 160×144 pixels — and emulated the other hardware limitations of the system including the number of objects that can appear on screen at once and its color palette. .

“For some reason or another, I’ve always been fascinated by invertebrates,” Alex said. “I have a degree in Aquarium Science to prove it. I’ve worked at a local aquarium, but that ultimately wouldn’t lead to the kind of job I wanted to do. I wanted to create something, not rediscover pre-existing information.”

David and Brooke Condolora did quite well in San Francisco while David was an assistant editor at animation powerhouse Pixar, and Brooke was freelancing as an illustrator and web developer. But after they made Doggins, a short video game named after their cairn terrier, they decided they wanted to do more. Their goal was to develop  Brooke’s long-gestating video game idea about Scandinavian sailor folklore into an actual game, but they knew they couldn’t do it in the Bay Area while paying $2,000 a month in rent. So they packed up and left. “Most of the two years that we spent developing Burly Men at Sea, we traveled the country,” David said. “We stayed in Portland, Austin, places in Brooke’s home state of Arkansas, crossed the border to Montréal for a short time. Living on the road is much cheaper than living in California.”

The Condoloras’ constant travel paralleled the story being told in their game. Burly Men At Sea, released in 2016 on PC and mobile and later ported to consoles and mobile, is a tale of three Scandinavian brothers who find themselves in situations based on folk tales that have been told by Scandinavian sailors for generations. Its minimalist, pastel-colored design gives the game a unique charm, and its click-based interactions in two-dimensional vignettes make it feel like the ‘90s era Sierra and LucasArts point-and-click adventures that David and Brooke adored when they were kids.

“Both the game and the trip we undertook were some kind of metaphysical journey for us,” Brooke said. They’ve since settled in the  Ozarks in northwestern Arkansas and run their studio Brain&Brain. “We wanted to tell this story, and design the game, from a traveling state of mind.”

There are, naturally, examples of couples who create art together in other media. British thriller authors Nicci Gerrard and Sean French publish their jointly written novels under the shared pseudonym Nicci French. The 2014 movie Still Alice, in which Julianne Moore portrayed a 50-something woman suffering from early-onset Alzheimer’s, was directed by married couple Richard Glatzer and Wash Westmoreland. But these collaborations seem especially common in video games. More than a dozen couples have released games in just the past few years. Ryan and Amy Green molded the unspeakable grief from their five-year-old son Joel’s death from a brain tumor into That Dragon, Cancer, a harrowing piece of interactive art. Couples have also created  Cultist Simulator,  A Robot Named Fight!. Overland , Verdant Skies, Mama Possum, Regency Solitaire, and Woolfe: The Red Hood Diaries. As the explosive rise of the indie circuit over the past decade brought game development and self-publish back to the kitchen table, a rising number of spouse-led teams decided to make their own labors of love.

Developing an indie game is so time consuming that it can hardly be classified as a simple lovers’ hobby like cooking classes or salsa dancing. As Anne Mönkkönen says, there’s just so much more to it. “Actually, if we hadn’t turned it into a shared project, it might have come between us. People tend to underestimate the vast amounts of  time you need to develop a video game; that was a key issue for our decision to make it a shared project. At the time of Driftmoon‘s development, we were both working full-time jobs, and it consumed almost all of Ville’s free time in the evening, while I sat elsewhere in the house, feeling bored. Once I decided to bring my own ideas into it, everything immediately felt a lot different. Now we owned this thing together.”

It helps that game building requires not just one specific artistic discipline but an amalgamation — prose, music, graphical art, animation, and coding just to name a few — brought together to produce  an interactive design. “The creation of a game can be divided into tasks that don’t necessarily overlap,” David Condolora said. “In fact, Brooke and I don’t really have any overlapping skills. We simply both do what we’re good at. Of course, the core design needs to be solid, and you need to discuss a lot to get it right. But apart from that, we mostly set out on our own separate tasks. We approached it like work. We tried not to talk too much about the game in the evening. It’s really funny, but many days we’d be talking about other things over dinner, after we were done developing, and felt like we hadn’t seen each other all day even after we’d been in the same room all that time.”

Most of the Mönkkönens’ collaborative work was also centered around the design phase of the game. “But that was also the part where we really considered the process of creating the game as quality time between the two of us,” Anne said. “There are sweet memories attached to it, of long walks we took together discussing themes and characters.”

One thing that might be different for game developers in a relationship is the way they handle creative differences. “Sure, we’ve butted heads from time to time, but nothing that amounted to an actual argument,” Samantha Barrett said. . “In fact, while getting into specific details about the design and the mechanics together, you get to know each other better in a very short period of time.”

The Condoloras had a very specific way of treating differences of opinion. “We both decided before we started on this journey that Brooke should be the project lead,” David said. “The whole Scandinavian sailor thing started from her idea. She was the storyteller for that game. We never really got into any knock-down disagreements over parts of the game. When we disagreed, I could simply make my point, and let her decide. That let it go fairly smoothly. Our next game we’re contemplating together, about which we’re not ready to tell the world yet, will probably be under my watch.” The Mönkkönens settled their creative differences in a way that is both radical and sweet. “If we had a difference in opinions at some point or another during the design of Driftmoon, we’d never settle for either his idea or mine, while the other would reluctantly follow suit,” Anne said. “We’d just ditch both our ideas, and then try to come up with a new one together. We’ve done that a few times during the development.”

The impact of creating something together doesn’t just change the game but the couple as well. The creators’ adoration for each other results in choices that feel both bold and refined, and the whole process changes them as well. “Creating a video game together gets you closer to each other’s thinking process,” Ville Mönkkönen said. “You discuss minute details that you wouldn’t discuss if you would just tell each other news about your job in the evening. When you make a game together, that consists of interacting systems and specific mechanics, you have to communicate in a very detailed way.”

“It’s funny how I discovered that we both communicate very differently,” Brooke said. “(David is) used to thinking out loud, and then goes with whatever’s on the table after (he’s) said it. I think a bit more before I talk. They’re just small differences. But I hadn’t noticed them before we made this game together.”

Developing a game with your spouse “is satisfying in a way that just hanging out together isn’t,” Samantha Barrett said. “Building something together was really important for us. Alex and I can’t have kids. This is our thing, something we made together. We like to see it as if we’re kind of ‘adopting’ the players in the game, and telling them our values through the gameplay. We convey how we think people should act towards each other, kind of like parents do with their children, through its look and design.”

Ronald Meeus
Ronald Meeus had a 'real' job as a newspaper reporter until about a decade ago, when he decided to disappoint all his loved ones by turning to video game journalism. He lives in Belgium.