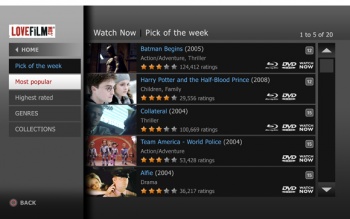 It’s only right that publishers try and make as much money from their games as possible, says LoveFilm executive.

The videogame industry has gained a seemingly unlikely ally in its battle to curtail pre-owned games sales. Rent-by-mail business LoveFilm, a European version of Netflix that also rents videogames, has said that it supports the efforts of publishers like EA and THQ to encourage people to buy games new rather than pre-owned.

At first glance, LoveFIlm might appear to be part of the problem, as rentals are another way of people playing games without actually buying them. Unlike pre-owned sales however, some money does goes back to the publisher with the rental model. LoveFilm’s chief marketing officer Simon Morris said that he had observed rights holders experimenting with different methods of maximizing the return they got from their investments. He said that LoveFilm was entirely supportive of these experiments, as videogames were expensive to produce, and he thought it was only right that publishers should get as much of that back as possible.

It must be inconvenient for LoveFilm to have its customers deprived of certain game content because they’re renting rather than buying, but you have to assume that it would be much more inconvenient for the company if publishers started to eschew game discs – which are LoveFIlm’s stock in trade – in favor of digital distribution. We’re a long way off from retail being overshadowed by downloads, but for LoveFilm, the longer it takes, the better.

I Want It All