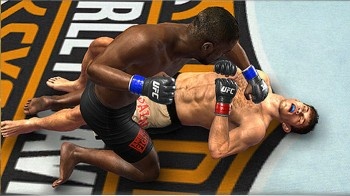 Disappointing sales of UFC 2010 Undisputed has punched THQ right in the paybook.

THQ has been forced to readjust its financial projections for the year following poor sales of its next-gen MMA fighter UFC 2010 Undisputed. The publisher has knocked a hefty $35 million off its quarterly net sales forecast and around $60 million for the year.

“UFC Undisputed 2010 is a high quality game,” said THQ president and CEO Brian Farrell. “Pre-orders were up 50 per cent over last year and we saw strong retail and consumer demand for the title coming into launch, resulting in shipments of 2.6m units to date.”

“Unfortunately, total sell through to date has been below our expectations and prior-year results. We will continue to drive demand through a strong marketing campaign and by working with our partners at the UFC, including the upcoming July 4th UFC 116 event featuring our cover athlete, Brock Lesnar … While we are disappointed with this financial update, we continue to execute on our plan of bringing quality games to market. Our primary goal in fiscal 2011 was to position THQ for growth in fiscal 2012 and beyond.”

UFC 2010 Undisputed is the first game to feature an “online pass”: single-use codes that allow access to online multiplayer, a move that has proven unpopular in some quarters. It’s naive to think that this alone caused the disappointing sales – especially considering the size of the numbers – but doubts over the games trade-in value will almost certainly will have had an effect.

Come See the First 90 Seconds of the New Futurama

E for Everyone, Except Me