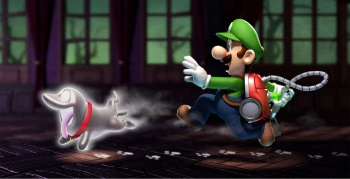 When Professor E. Gadd has trouble with ghosts, who’s he gonna call? Mario’s slightly lesser-known younger brother, of course! Following the story of Luigi’s Mansion on the GameCube, in Luigi’s Mansion: Dark Moon, Professor E. Gadd calls upon Luigi once more to break out the Poltergust 5000 spiritual vacuum cleaner and bust some ghosts. It’s pretty hard to classify Dark Moon as a specific genre, so just imagine an action adventure RPG like Legend of Zelda: Ocarina of Time crossed with a 3D platformer like Super Mario 64. It’s a fun game with a lot of interesting mechanics that utilize the strength of the 3DS.

You play as Luigi as he fights his way through various haunted mansions, sucking up ghosts and collecting pieces of the “Dark Moon,” which, once completed, should put an end to the ghostly goings on. The game is broken up into five different buildings, each made up of levels that explore different sections of the structure. You start out with just a flashlight and gradually collect new items to improve, and eventually complete, your ghost hunting arsenal. Each level has a specific objective, such as finding a key, rescuing Toad, or even doing some plumbing (That’s right, a Mario game that actually features plumbing!). A lot of the platforming puzzles you’ll need to figure out to proceed are pretty standard “Zelda style” fare (Fire beats spider web! Water plants to make them grow! Use the item you just unlocked to open a new area!), but they are well-paced and challenging without being frustrating.

The levels are what you might call perfect “bus trip” length. Each should take around 15-20 minutes to complete. Unfortunately, there is no way to suspend-save in the middle of a level, so while the 3DS’s suspend mode means you can just close it and resume later, if you want to play another game or conserve battery life, you’ll lose your progress.

The ghosts themselves are the most interesting part of the game. There are ghosts that clobber you, slime you, swallow you whole, and even possess inanimate objects, and they all require different strategies to beat. The way the game introduces new enemies is fantastic; it gives you hints as to what their weaknesses may be without bludgeoning you over the head with a massive glowing weak spot or an annoying pop-up tooltip. Boss battles are a special treat, usually requiring the use of something in the environment to take them down. Luigi is often seen as cowardly, but he’s out to prove that he ain’t ‘fraid of no ghost!

While most enemies will have some kind of unique mechanic you first must figure out, the main way you bust the ghosts is to hit ’em with the one-two combo of a bright flashlight burst to blind them, then a strong bit of suction from the Poltergust. While capturing a ghost you’ll have to “pull away” in the opposite direction to weaken it enough to vacuum it up, making for a thoroughly satisfying ghost-sucking experience. If another ghost or creature hits you during the process, however, it will interrupt you and you’ll have to try again. The game rewards you with more treasure for pulling off “perfect captures” or capturing multiple ghosts at once. The treasure is used to upgrade the power of your Poltergust 5000. In the later levels there’s a lot of strategy and timing involved, making the whole process even more enjoyable as you perfect your technique.

Luigi’s Mansion: Dark Moon is a surprisingly well written game, considering Professor E. Gadd does the lion’s share of the talking. The interactions between Luigi and the professor, as well as Luigi’s cowardly-yet-still-somewhat-heroic exploits throughout the haunted houses are really funny to watch. It’s kind of adorable to see Luigi shiver with fear when confronting a particularly spooky ghost, and then jump up and exclaim “I did it!” in his silly little voice after you finally defeat it.

The 3D feature is a major selling point of the 3DS, and it’s worth mentioning because every new game’s 3D effects seem to vary, with some titles looking amazing and others looking simply awful. Thankfully, Luigi’s Mansion: Dark Moon‘s 3D effects lean towards the positive end of the spectrum, and shouldn’t give you any problems… until you have to use the gyroscope controls.

Anyone who’s used a 3DS knows that the 3D effects work best when you hold the system perfectly still in the “sweet-spot.” Whoever thought it was a good idea to implement a feature where you have to move the damn thing around obviously doesn’t play games with the 3D turned on. Most of the time gyroscope controls are optional, so you can just use the slide pad instead, but there are a couple of instances where using them is mandatory and it’s quite aggravating. Nobody wants to sit on the bus wildly flailing their 3DS from side-to-side.

Bottom Line:
It’s a fantastic little platformer that looks great, plays well, doesn’t talk down to you and utilizes the strengths of the system to their full effect. This is a game that really “gets” the essence of the 3DS, and understands that a good 3DS game means so much more than just using the 3D effect.

Recommendation:
Everyone with a 3DS should enjoy this game, but fans of Mario games, as well as fans of puzzle-focused action-adventure RPGs like The Legend of Zelda, will especially enjoy the ghostbusting gameplay mechanics of Luigi’s Mansion: Dark Moon.