“The best way to criticize a movie is to make another movie.”

Of course, Godard was probably referring to the way he, Francois Truffaut and other revolutionary filmmakers of the French New Wave transitioned from film journalists for Cahiers du Cinema to filmmakers in their own right, but either way, he was right.

I’d offer that the second best way to criticize a movie is to find another movie and point it out: Want to see just how good Sin City was? Just look at how bad The Spirit was. “Whaddaya mean, The Fantastic Four sucked!? What did you want it to be!?” See: The Incredibles.

The downside to this is that rarely, if ever, do movies that (intentionally or not) “answer” one another hit theaters in the same time period. And yet, here now we have such an occurrence (at least in the U.S.); with Robert Rodriguez Machete and Sylvester Stallone’s The Expendables – both gussied-up B-movies packed with dubious “stars” pitching a return to old-school R-rated action – hitting screens within weeks of each other.

And, well… folks, I’d been itching to take a more-analytical look into just why I detested the bafflingly-popular “Expendables” as much as I did anyway. With the far superior Machete on hand as well, I figured it’d be more fun to follow the spirit of Jean-Luc’s dictum and lay them side-by-side to show how – at least in the opinion of your humble correspondent – one film can stride and another can stumble while going down the same road.

When you’re done, be sure to check out our full reviews of The Expendables and Machete.

Story
The Expendables: A team of mercenaries of indistinct origin are asked to fight a dictator. They say no, but then say yes because one of them met a girl. One of them quits and joins the bad guys, immediately fights his ex-friends and dies. Jason Statham briefly takes a time-out for a short, unrelated Crank sequel where he beats up a guy who hit his ex-girlfriend. There are two bad guys who argue and fight each other, but the henchmen fight the good guys anyway just because. Following many shootouts, the good guys sit around and have a party. The one guy who went bad and died is alive again, somehow. Essentially, it’s 90 minutes of people you don’t care about in a story not worth following.

Machete: Ex-Federale turned illegal-immigrant day laborer, supposedly hired to kill a racist Senator, is betrayed and left for dead. He joins with an underground immigrant-rights network to get revenge, and uncovers a far-reaching political conspiracy. Silly? Yes, but interestingly laid out and makes sense in context. 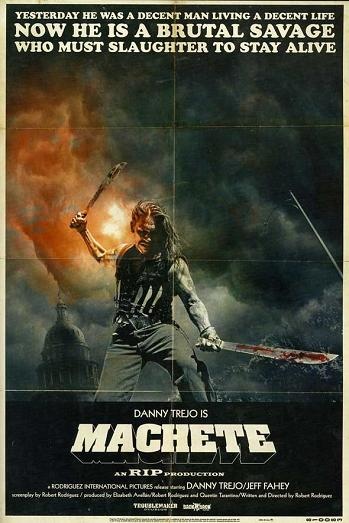 Characters
The Expendables: By now everyone has made this joke, but it bears repeating: The more accurate title would’ve been “The Interchangeables.” Stallone’s character reloads his gun fast, Jason Statham prefers throwing-knives to guns. That’s about it, everyone else is basically a blank slate – empty characters without even much superficial definition: Jet Li is completely wasted and barely even gets to use his martial-arts prowess, Randy Couture literally has nothing to do but fight Steve Austin (who also has nothing to do.) Terry Crewes doesn’t even get to use his considerable comedic abilities in a film that could’ve used some.

Action
The Expendables: Mostly shaky and handheld, evidently to conceal budget issues. Fight-choreography is sloppy and dull. Gunfights are largely limited to generic shots of one side firing guns, followed by shots of guys falling down or leaping away. Despite being billed as a return to the high-caliber brutality of mid-80s action, it looks to have been shot for a weak PG-13 – with insert-shots of gory wounds and dicey CGI splatter added in at the last minute.

Machete: Machete himself spills more blood and scores more applause-worthy “creative” kills in his first five minutes than any of the Expendables can pull off in 90, and it only gets crazier. The action is sprawling and brutal, but filmed in crisp lighting and with dynamic composition – you can always see what’s going on, and it always looks good. Pretty pictures of ugly events – the essence of a great action movie.

Best Part
The Expendables: Jet Li kills Gary Daniels with an axe-kick to the head while Statham holds him down. It’s not much – the choreography is generic, the camera is all over the place and it’s seriously lame that the film never let’s Li win a fight without an “assist;” but it’s the closest the film comes to “living up” to the gonzo 80s bruiser flicks it’s trying to ape.

Machete: Danny Trejo slices a bad guy’s stomach open, pulls out his large-intestine and uses it as a rope to rappel out a window. No, really! Easily the most awesome movie kill of 2010, and a future “best kills ever” fixture for sure.

Worst Part
The Expendables: “I would have win!” Jet Li, who has starred in more good action films than everyone else in the film combined, is reduced to a joke bit-part where he mainly complains about money and is never allowed to win a fight on his own (see above).

Machete: Jessica Alba beats up a Luchadore hitman using kung-fu she learned from a Wii Fit game. I know, I know… 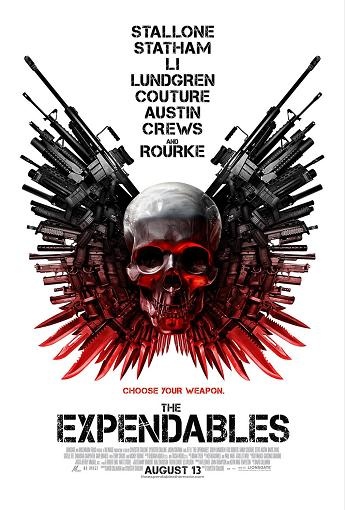 Machete: Naked henchwoman was hiding her call-the-bad-guy cell phone the whole time. Wait, where was she keeping… oh.

Inspired Casting
The Expendables: Um… it’s nice to see good ol’ Dolph Lungdren in something that didn’t go straight to video, I guess.

Machete: If nothing else, Robert Rodriguez is a master of matching actor to character… but even he couldn’t have possibly foreseen how uncomfortably perfect Lindsay Lohan would be as the bad guy’s drugged-out wildcard daughter.

Casting Mistake
The Expendables: Randy Couture seems like a nice guy; but he’s devoid of onscreen charisma and MMA-style fighting on film is like watching grass grow.
Machete: Steven Seagal is actually a lot of fun as the evil Mexican drug kingpin; but once you see him “fight” you’re instantly reminded of why his action-hero status plummeted. Bummer.

Depth
The Expendables: Zilch. There isn’t a damn thing going on under the surface here. That’s not an inherent flaw – as The Expendables fans have reminded me ad-nauseum, not everything needs meaning or depth – but especially when making a “just for fun” movie some level of real heart or conviction can elevate the material. Stallone’s own Rambo is a touchstone not just for the action, but for the very sincere anger at the mistreatment of Vietnam veterans that fuels the character and the film’s motivation.

Machete: Case in point: The whole thing may well be “just for laughs,” but just under the surface of the wink-wink irony is very real righteous anger about anti-Latino racism in general and the current scapegoating of “illegals” by American politicians specifically. Is Machete a joke? Yes, but a joke can be a powerful thing: Ask George Carlin, or Richard Pryor. This joke is written on a bucket of gasoline that Rodriguez and company have gleefully hurled onto the fire of the American immigration debate – and even if they’re “kidding” it took some serious stones. This movie, like its title-character, is royally pissed-off, and that revolutionary fury gives it the most vital muscle a “brainless” action movie can have: A heart.

So, there you have it. Two movies, same basic angle, night-and-day results. Looking at this all laid out, it’s clearer than ever to me why I found The Expendables such an infuriating disappointment was because of how much I wanted to like it. I wanted to have a great time. I wanted it to be a fun, old school, brutal action flick. I wanted it to give me that same cathartic exhilaration I used to get from Commando or Rambo or even American Ninja.

Said with the benefit of hindsight: I wanted it to be Machete.