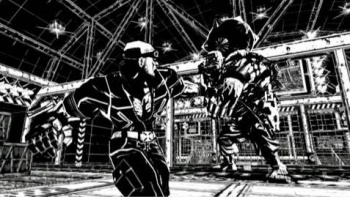 Platinum Games has another violent title in the works that includes the star of MadWorld, but it brings the action online this time.

Max Anarchy is said to be in a completely new type of genre. Inaba best describes it as “Massively Multiplayer Melee Fighting Action,” but it’ll probably just feature a “large number” of players online at once and won’t be a full-fledged MMO. The exact number of players that can join a game wasn’t revealed.

Details are still somewhat vague, but a single Max Anarchy screenshot shows the player lifting an enemy off the ground with a chainsaw attack, while another enemy wearing a hood and a hockey mask sneaks up from behind to attack with a torch. That certainly sounds like the style of MadWorld to me. Inaba said players will strengthen their abilities over time and engage in group fights where they could end up surrounded.

Max Anarchy will also include a single player mode with a “solid story,” in addition to co-op and free-for-all multiplayer modes. Platinum is bringing back MadWorld star Jack as a side-character even though he has nothing to do with Max Anarchy‘s world, just because the studio likes him so much. Maybe Max Anarchy will bring Jack to a wider audience this time.

Sega is publishing Max Anarchy on the Xbox 360 and PlayStation 3. It’s expected to be released in Japan in fall 2011.

Preview: Watch Your Back in Salem