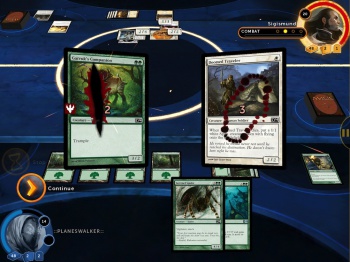 Duels of the Planeswalkers was originally introduced back in 2009, with a genuinely approachable interface, a detailed tutorial, and a huge amount of replay value. In 2011, Duels 2012 hit the market, improving on the original with important gameplay options that appealed to higher-level players and a new game mode, while retaining the accessibility to newcomers that the original title was known for. Duels 2013 launched a year later, with more minor improvements like manual mana tapping, as well as a new, although not entirely well-received gameplay mode, Planechase. Stainless Games has more or less perfected their craft. Duels gameplay is now proper Magic for all intents and purposes. Without anything further to improve on with gameplay, Stainless took the longest-standing complaint about the franchise – the lack of legitimate deck building – and remedied it in Duels 2014.

If you’ve played previous installments in the series, you’ve already got a pretty good idea of what to expect from the core game. One all new addition is the semblance of a story which you’ll see in the campaign mode. The story stars Chandra, who is hunting down an enemy planeswalker, Ramaz, with a little help from you, her planeswalking ally. It’s not terribly in depth, but given that this is the first shot at any kind of story in a Duels game, it’s not a bad attempt. Not to mention that stories in Magic are typically told through the sets, planes, and cards, rather than through actual matches. Throughout the campaign, you’ll be traveling between planes, from Zendikar to Ravnica, pursuing Ramaz via a clue from each setting. Instead of having you play real games with random draws, however, most of your Campaign matches are going to have you playing against a stacked deck “challenge.” You get a random draw, but your opponent will be doing the same sequence of moves every game. On the one hand, it’s nice to know exactly what to expect and be able to plan for it. On the other hand, that’s boring compared to playing actual games of Magic, although it’s still got some appeal as a simple test of your deck’s effectiveness in the given situation. The final boss of each plane you travel to, however, does seem to be a properly random game, with all the variance you’ve come to expect from Magic.
In addition to the standard campaign fare, there’s also a new batch of puzzles to check out. These puzzle challenges vary from very easy to excruciatingly difficult, and knowledge of the cards and interactions is hugely beneficial, but by no means required. You’ll likely develop a love/hate relationship with the puzzles in Duels 2014, and the best advice for when you get stuck is to take a break for a while, and approach it with fresh eyes later. 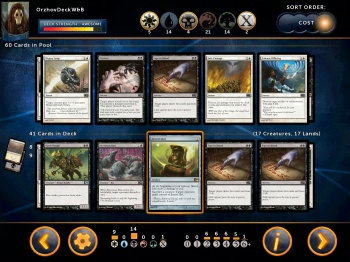 What really sets Duels 2014 apart, however, is the Sealed Play option. If you’re a veteran of Magic, you’ll recognize the format as a favorite for pre-release events. It gives you six booster packs, each containing random cards from the set, which you’ll use to create a 40-card deck. This is the first time in Duels history that you can actually create a deck from scratch, and is hands down the best thing to happen to the series since its inception. As you play through the Sealed Campaign, you’ll unlock three additional boosters to help strengthen your deck, netting you nine total booster packs, which can make for some really powerful decks. The Sealed Campaign is weird, however, as your opponents will be playing constructed decks, which can make them somewhat challenging to defeat, given that you’re operating with a random pool, but persistence will pay off with additional boosters, so keep at it. If you don’t like your Sealed Pool, you get a second slot so you can try again, with the option of buying additional slots via microtransaction.

Veteran Magic players will almost certainly be constructing their own decks, but Duels is also a starting point for newcomers, so there is an auto-build option available for players not comfortable building themselves. The auto-build function is actually quite competent at putting together a powerful deck, which was something of a surprise. You can even pick a few cards that you really want to play with, and just let the computer build the rest of the deck for you. Advanced players will want to customize their decks, but if you’re new, or just in a hurry, don’t be afraid to let the computer do the work for you.

Online play has been a staple of Duels for some time now, and this iteration seems to be pushing it even harder. With the lack of replayability in the campaign mode, Duels 2014 is almost forcing players into multiplayer, but the addition of Sealed Play more than makes up for the missing single-player replay value. If you’re looking for more of a challenge in online play, then Sealed Play is likely where you’ll want to be. Given the attraction that Sealed Play will have for advanced players you’re likely going to have a real challenge on your hand when playing your own custom-built deck online, as compared to playing with the pre-constructed decks that everybody has access to.
With a handful of proper multi-colored decks to play with in the campaign, including a 3-color Sliver deck, which they graciously give you halfway through the campaign, Duels 2014 is a definite step forward from the mono-colored focus of the base Duels 2013 decks. The campaign doesn’t have the same replay value as earlier versions, but the Sealed Play option will provide more hours of entertainment than mindlessly pummeling a computer opponent with a pre-constructed deck anyways, as long as you don’t mind going online.

Bottom Line: Duels 2014 has everything you’ve ever wanted from a Duels game. The Sealed Play option takes this version to a whole new level, and will make it exceedingly difficult for Stainless to one-up itself again.

Recommendation: Thanks to Sealed Play, this is the best Duels to date. Whether you’re looking to learn Magic, or have played every other Duels to completion, this is a must-have title.