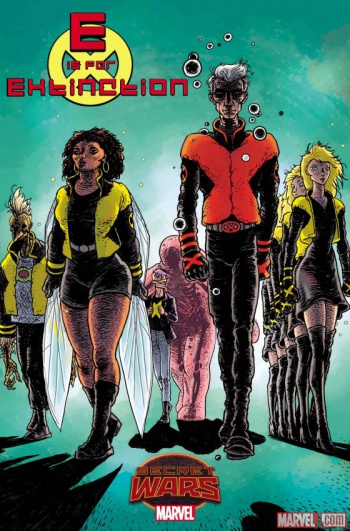 There are countless wonderful X-Men storylines out there, but if I had to choose, my personal favorite run would be Grant Morrison’s New X-Men. This arc brought the villainous Emma Frost on the team, introduced the concept of secondary mutations, and actually treated the X-Men like a school instead of a mutant training center. So I was very excited to hear that Secret Wars will be revisiting the era with E Is For Extinction, with a major twist. In the Battleworld version of E, the fan-favorite characters from Xorn’s “special class” are the X-Men – led by Xavier’s old nemesis Magneto.

Battleworld’s E Is For Extinction replaces the X-Men with characters like Beak, Angel Salvadore, Basilisk, and Martha Johansson, all under the leadership of Magneto. But that’s not the only major change: Somehow this Battleworld sector has fully embraced mutants and accepts them as superior to humans. That creates a very different environment when the team faces New X-Men threats, such as the U-Men who augment themselves with mutant body parts, or the original X-Men themselves.

Written by Chris Burnham with art from Ramon Villalobos, almost every original New X-Men character will appear in this version – including the Stepford Cuckoos and Quentin Quire. “It’s almost an alternate timeline version of [New X-Men]”, Burnham explains. “It’s almost like another take on events from the first issue and spin wildly out of control from there. It’s not quite a ‘What If…?’ or alternate timeline, it’s just coming out of the Secret Wars events.”

All told, I can’t decide if E Is For Extinction is a massive overhaul to my favorite X-Men storyline, or a great opportunity to revisit old friends. We’ll find out when the comic launches on June 24, 2015.

8 of the Biggest Flops in Videogame History