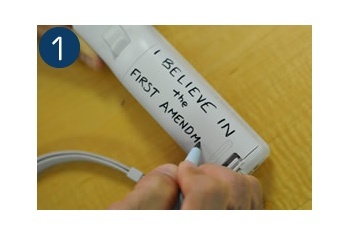 The Video Game Voters Network has unveiled a new campaign to tell Senator Leland Yee, the man behind the California videogame law that’s about to go before the Supreme Court, that we’re standing up for our First Amendment rights.

What do you get when you mix a broken controller with fear-mongering political figures determined to usurp the First Amendment as it applies to new forms of media now and in the future? “You Can’t Control Me,” a new initiative by the Video Game Voters Network to “(joy)stick in to the Man” by sending him a symbolic message that gamers won’t stand idly by while their Constitutional rights are gutted.

The process is simple. Collect up your old, broken controllers and write on them, “I believe in the First Amendment.” Put them in a box, snap a photo to send in to the VGVN, then seal it up and address it as follows:

Take it to the post office, slap on some stamps and send it on its way. That’s it, that’s all – perhaps not the most well-reasoned argument in the fight against videogame censorship, but if enough controllers make their way to Senator Yee’s office, the point will be made. And please, please, resist the urge to expand upon the sentiment with f-bombs or other colorful commentary; that’ll just make his point, not ours.

Find out more about “You Can’t Control Me” and how you can stand up for your First Amendment rights at videogamevoters.org.

The Hunting of the Geek