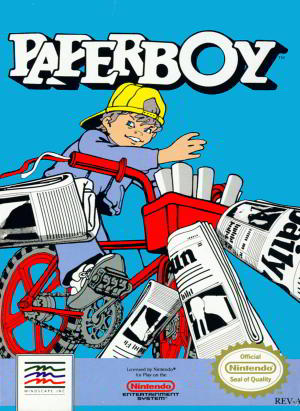 You sit safely in front of the television screen, a controller firm in your grasp, watching with a hint of disbelief as the evils of the world take over the streets in a pixelated reproduction of nightmares you never even thought to have. Hidden behind a flimsy mask of tranquility, you discover the home values aren’t the only things at risk of dying. Danger lurks behind every corner, under every grate. Yet you have a mission. You can complete your task without distraction, of course. Alternately, however, you know that there is a deeply cathartic satisfaction in caving to one’s innate desire to participate in the mayhem in lieu of battling it. Without thinking twice, you submerge yourself in a fantasy world of selective morality. What you do from there is up to you.

One of the greatest gifts provided by gaming is the ability to indulge in often frowned upon societal behaviors. The illusion of choice in games adds complexity and realism, as well as providing the player with a sense of power, making them feel more invested in the game. Player option scripting has become the Holy Grail of game development, and has evolved exponentially thanks in no small part to an adolescent boy and his bicycle.

Retro sweethearts Paperboy and Paperboy 2 were early pioneers of the freedom of choice gameplay experience that has become a recurring theme in video games, evidenced to this day by titles including Grand Theft Auto and The Walking Dead. A selection of unlawful behaviors, such as destroying stone posts, knocking over tombstones, and breaking out the windows in the homes of non-customers, are rewarded with bonus points. While certain actions do have negative consequences – like an orphaned lawn mower springing into motion to avenge it’s fallen handler – the most common result of attacking men as they work on their vehicles, an elderly couple as they swing on their front porch, or an aspiring daytime breakdancer as he throws down moves in the middle of the sidewalk, is individual pleasure. 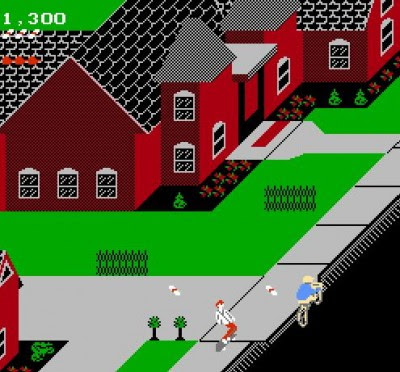 Freedom of choice in gaming would be incomplete without the additional options of neutrality and good. Completing your job efficiently, with neither positive nor negative intervention, is an available option. While many obstacles exist in the game, it is possible to maneuver around them. Obstacles range from the everyday items of storm drains, fire hydrants, and cars, to the bizarre appearances of tornadoes, ghosts, and the Grim Reaper himself. Additionally, in the effort to encompass the spirit of chaotic good, Paperboy offers players the opportunity to fill the role of the unconventional hero by saving a baby in a runaway coach, thwarting a burglary in process, or ridding the streets of a nefarious graffiti artist. You can achieve all of this without even breaking stride.

Paperboy begins with the choice of a difficulty setting: Easy Street, Middle Road or Hard Way, and consists of seven levels (one week of deliveries) with increasingly difficult obstacles. Regardless of the alignment you choose to complete your tasks, you are rewarded with an obstacle course at the end of your daily trek, as is the case with any deteriorating suburban Elysium of value.

Modern titles have successfully integrated more meaningful moral dilemmas, with more severe consequences which directly influence the course the game will take. The presence of such choices immediately increases the replay value, and consequently the overall value, of a game. You can choose based on a moral code of good versus evil, a difficulty preference, or what you think will simply have the most interesting result.

Games are an increasingly significant staple of entertainment across the globe, and provide an interactive world of entertainment and escapism. Of course it is virtually impossible for games to offer completely restriction-free choice – the paperboy certainly isn’t going to give up his route in order to pursue a more fruitful career in quantum physics. However, the ability to choose between good and evil is a crucial characteristic of human behavior and thus an invaluable addition to any gaming experience.

Paperboy was originally released as an arcade game in 1985 by Atari Games, and was later ported to a variety of consoles. The Nintendo Entertainment System version was the first NES game developed in the United States. Paperboy 2 offered the additional choice of playing as Papergirl.