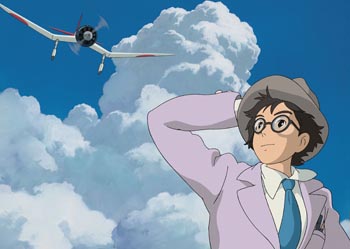 This arrest is the first concerning Hayao Miyazaki’s 2013 film The Wind Rises.

Police arrested a man from Nahari-city, Mie Prefecture, Japan yesterday for copyright infringement after he allegedly posted footage from two films as well as a 30-minute digest of Hayao Miyazaki’s film The Wind Rises, which has not been released on DVD/Blu-ray yet.

The suspect confessed to posting the video to video-sharing website FC2 but has said nothing about whether he filmed The Wind Rises in a theater. He uploaded videos in July and November 2013. The film released in Japanese theatres on July 20, 2013, and was the most successful Japanese film in 2013.

Upon confessing, the man is reported having said, “I was happy with the people’s compliments. I wanted to be a popular guy.” The police are investigating how he obtained the footage. Studio Ghibli issued a charge against him on Jan. 6.

FC2 is the third most popular video hosting service in Japan (YouTube and Niconico are more popular), and infringing on copyright and intellectual property rights is expressly prohibited, including posting any material that a third party owns. Japan began enforcing its anti-piracy laws in October 2012, including strict penalties for illegal downloads. The country has harsher anti-piracy and copyright laws than most other. It is no longer unusual to see news stories in the Japanese press for people to be arrested for uploading and sharing music, tv episodes, and films – and often anime is shared through FC2.