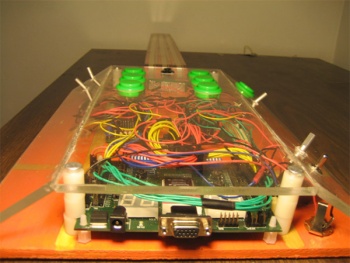 If Guitar Hero can make videogames cool, this 8-bit guitar should do the same for chiptunes.

Chiptunes – original pieces of music composed using old videogame machines – are lots of fun to listen to, but creating them can be quite a chore. It often requires using different forms of trackers, emulators, and re-purposed sound-chips from the 1980s. Mike Davenport’s senior project for school, a chiptune guitar, aims to make the process a little bit cooler.

Forget about building up calluses on your fingers, the area where a guitarist would usually strum has been replaced with arcade buttons. The only strings involved here are internal wires, with “membrane potentiometers” instead modifying the guitar’s pitch. The whole thing was put together using a field-programmable gate array, apparently. I know what that is.

He’s uploaded a simple performance to YouTube (included below) that won’t have fans cheering like they would at the Venice opera, but it exhibits the abilities of his creation. It appears to be able to create multiple loops that play simultaneously (or he’s using a loop pedal), much like a chiptune tracker, so it’s technically multiple instruments in one. It might not look like much now, but people said the same thing about Fred Piano’s first prototype. With a coat of paint, I’m sure there are plenty of people out there that would like an 8-bit guitar of their own.

StarCraft II Has a Release Date At Last: July 27th

Could Bungie’s New IP Be an Action RPG?