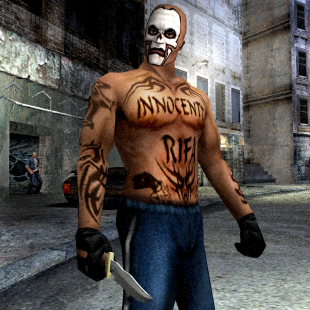 Manhunt and Bully have been added to the European PlayStation Store as HD PS4 re-releases.

While Rockstar is obviously best known for Grand Theft Auto, the company has produced a number of titles over the years, many of which have earned just as much public ire as its famous crown jewel. Take Manhunt and Bully. Swapping out GTA‘s theme of urban crime for ultra-violent snuff horror and high school hijinks, both inspired controversy and, in the years since, have become cult classics. Now, thanks to a surprise re-release on the PS4, their (European) fans can enjoy them with modern amenities.

The new PS4 editions were released today without so much as a word of advance warning from Rockstar. Ports of the original PS2 games, both titles have been upscaled to 1080p high definition and equipped trophy support. Currently available only in Europe, it’s likely that upcoming store updates will also bring the re-releases to North America. Manhunt is currently being sold for 11.99 pounds sterling (about 17 US dollars) while Bully is retailing for 14.99 (about 21 US dollars). We’ve reached out to Sony for more information about a North American release.

Just speaking personally as a big Manhunt fan, I’m super excited about the prospect of playing the games in an HD format. What I’ll be interested to see are the trophies added in. With its focus on stealth and gory executions, Manhunt could be perfect fodder for some interesting trophies. Here’s hoping they don’t kill the mood the though. That game had a great atmosphere and it would be a shame for it to be spoiled by annoying pop-ups in the corner of the screen.

How Long Does A Vampire Need To Drink Blood? Science Has The Answer