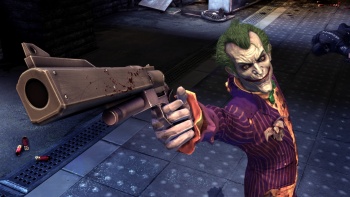 According to Mark Hamill, Arkham Asylum 2 will include the last appearance of the Joker as we know him.

Mark Hamill is best known for playing Luke Skywalker in the Star Wars films, but his second most popular role is likely as voice of the Joker in various Batman properties, beginning with the damn good Batman animated series of 1992-1995. Most recently, he did his Joker thing again in Batman: Arkham Asylum for the Xbox 360, PS3, and PC, and will be reprising his role in the game’s 2011 sequel. The thing is, it might be his final go at the last-laughing psychopath.

Speaking of Arkham Asylum 2, Hamill told IGN: “This will be my last, there’s no question about that. But it’s the last hurrah.” It seems impossible that the Joker could somehow be killed, even if the he ended up in an exploding helicopter or thrown off of a cliff (he’s got a tendency to come back from anything), but it’s a possibility. The truth behind Hamill’s statement is that he has a great deal of respect for the Joker and wants to make sure any performance ends on a good note.

Hamill was reluctant to even come back for Arkham Asylum 2, believing that he and developer Rocksteady were “never going to be able to top the original.” Still, he says: “I got on the phone with Rocksteady and they really reassured me and told me what they were going to do with the sequel. But I’m sworn to secrecy!” This appears to be an indication that Rocksteady is holding itself to the same level of quality that it had with the first game, which according to Hamill “did something like $562 million [in sales].”

With those kinds of numbers, it’s a sure bet that Arkham Asylum 3 will come along if the sequel doesn’t tank horribly, but without the Joker. It’d be possible to do it without Hamill, but it just wouldn’t feel right. Batman has a huge roster of villains that Rocksteady could look to in the future, though none are quite on the level of ol’ green hair. Except, perhaps, for the Penguin and his amazing arsenal of umbrellas. I hear one can shoot smoke.