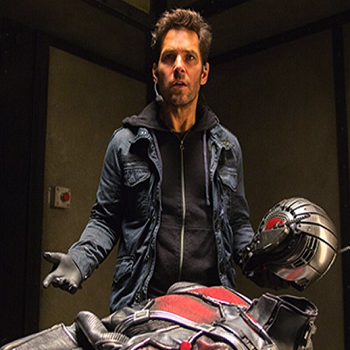 Growing fatigued of superhero movie sequels and spinoffs? TOO BAD.

Although Ant-Man didn’t exactly achieve the box office success of Marvel’s forty *other* superhero movies released in the past 5 years — earning just $178 million domestically on a $150 million budget — it was an entry in the all-important “Phase Two” of their cinematic universe, which can only mean one thing: a sequel.

Marvel is gonna Marvel, essentially, and as such, the company announced plans for an Ant-Man sequel yesterday.

The project, titled Ant-Man and the Wasp, will be “the first Marvel Studios film named after its heroine” (yay equality!) and already has a release date set despite not having a director, shooting locations, or pretty much anything else lined up. So clear your calendars for the weekend of July 6, 2018, folks, because Marvel’s next 200 million dollar advertisement disguised as a movie is on the way!

You’ll have to forgive my sarcasm. I generally enjoy anything Paul Rudd is in and thought Ant-Man certainly wasn’t the worst comic book movie I’ve ever seen, but I simply can’t shake the feeling that the entire MCU is just a long, time and money-consuming con-game that ends like so.

Maybe it’s just me, but the fact that — in addition to the Ant-Man sequel, Captain America: Civil War, a Doctor Strange movie, yet another Spider-Man movie, Thor: Ragnarok, Avengers: Infinity War – Part 1 and 2, Black Panther, and Guardians of the Galaxy Vol. 2, all of which have been announced for the next few years — Marvel is now teasing yet-to-be-named movies which will hit theaters FIVE YEARS FROM NOW.

Additionally, Ant-Man’s second adventure will lead to a couple of other films shifting their dates, with Marvel’s “Black Panther” moving up to February 16, 2018 and Marvel’s “Captain Marvel” landing on March 8, 2019.

I mean, this has to be some kind of sick joke, right? How can this even be considered an announcement? THEY DON’T EVEN HAVE THE TITLES YET. (Author’s note: I’m aware of the fact that I’ve probably come to the wrong place to air out my grievances about Marvel, but still, it had to be said.)

My personal trepidation aside, Marvel additionally released the concept art for the titular Wasp, aka Hope Pym (played by Evangeline Lily), which you can check out below.

Basically, it’s the same outfit as Ant-Man’s, but WITH WINGS.