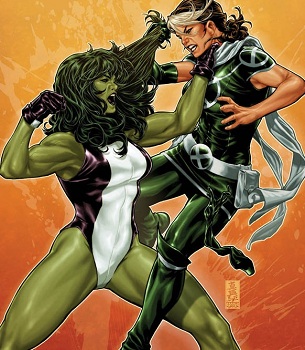 Two new novels will focus on She-Hulk and Rogue.

It is a truth universally acknowledged that a single woman in possession of superpowers must be in want of a boyfriend. This is why Marvel’s latest project to grow a female audience involves two things that women love: superheroines and romance. She-Hulk and Rogue, two of the Marvel U’s most popular female superheroes, will star in their very own chick lit novels sometime in June 2013. The She-Hulk Diaries and Rogue Touch will deliver all the action and drama comic fans have come to expect, just with a female perspective and an emphasis on their love lives.

The books will release through Hyperion, which, like Marvel, is part of the Disney umbrella. “Marvel’s superheroes are real people first,” says Elisabeth Dyssegaard, the company’s editor-in-chief. “They easily can be transposed to another kind of storytelling.” Dyssegaard has already assigned two writers to the project: Marta Acosta, a paranormal romance authoress, for The She-Hulk Diaries, and newcomer Christine Woodward for Rogue Touch. Dyssegaard hopes that the novels have appeal for existing comic fans – both men and women – but notes that presenting She-Hulk and Rogue in a new format could help some new fans of the XX persuasion ease into the dizzyingly confusing Marvel Universe. “Marvel has had tremendous success with recent hit movies, and we think it’s a great time to explore what happens to super heroines when they are dropped into traditional women’s novels.”

The two characters are well-known in comic book fandom, but have a little less cachet in the world at large. She-Hulk, also known as Jennifer Walters, is a cousin of the better-known Incredible Hulk. While she shares Bruce Banner’s green skin and super-strength, she also possesses a keen intellect and works as a lawyer. Rogue, a down-home girl from the Deep South, is a member of the X-Men, whose mutant power allows her to steal life energy – and superpowers – from other people with just a touch. The She-Hulk Diaries will be a slice-of-life tale all about the titular heroine’s trials and troubles as a lawyer, a superhero, and a lover. Rogue Touch, on the other hand, skews a little more dramatic, weaving a tale of Rogue first discovering her powers by nearly killing her boyfriend.

Marvel has actually attempted this strategy before with promising results: Romance novelist Judith O’Brien wrote a young adult novel all about Mary Jane Watson’s complicated relationship with Spider-Man, popular enough to merit a sequel. The idea itself is also sound: Superhero comics are essentially soap operas with colorful tights, so steamy love affairs and intense emotional drama are already an integral part of the stories. Whether She-Hulk and Rogue would better be served by comic book miniseries aimed at women instead is a fair question, but at least the two iconic characters appear to be in capable hands.

Thanks to Steph Kroll for the tip!