And so we continue with Marvel’s Agents of S.H.I.E.L.D., the series that proves you don’t need to look like a million bucks so long as you can deliver a sense of wonder – as in, “I wonder which sliver of Avengers movie continuity or Marvel Universe arcana will make a teasing verbal cameo this time!”

I kid, I kid. Mostly. The fact is, I don’t really know that it’s “fair” that Agents‘ pedigree has now guaranteed it a full season to work through kinks that a similarly promising series with a shaky start but without the benefit of being backed-up by connections to a broader pop-culture phenomenon wouldn’t have gotten… but I’m glad that it is. For now, this most recent episode (titled “Eye Spy,” which actually turns out to be kind of a spoiler) is refreshingly indicative of all that promise. In fact I’d call it the first legitimately great episode of the series: It moves fast, it keeps throwing out fun sci-fi/spycraft ideas, and it’s not leaning on mythology (either from the movies, comics or previous episodes) to get by.

Speaking of mythology, though, I’d be curious to know just how long of a leash these showrunners are working with regarding their sparing but spotlighted use of Marvel Universe fixtures. If someone decided they wanted to build an episode around, say, The Wrecking Crew, do they have to call up the guys working on Captain America 2, Guardians of The Galaxy, and Ant-Man to make sure they weren’t planning on using them first? Is there one person whose job it is to keep track of all this? Does Agents of S.H.I.E.L.D. have the same freedom to rearrange the company furniture as ABC’s other Disney-brand spinoff series Once Upon a Time, which was (apparently?) allowed to have one of the Mouse House’s precious Princesses™ come out of the closet this past weekend?

Eye Spy opens in Stockholm with a mini-parade of those guys with the matching suits, handcuffed-briefcases and red plastic masks whose presence in certain ads had fans speculating about an appearance by Flag-Smasher, but they’re revealed to be a distraction. (Literal red herrings!) An elaborate attempt by diamond merchants to protect the one guy among the group carrying a fortune in precious stones. Whatever they are, they’re a fun “huh!?” pop-art visual cue that would’ve felt right at home on The Avengers – the other one – and feels comfortably close to the 60s spy-fiction miasma from which the S.H.I.E.L.D. of the comics sprung.

In any case, the ruse doesn’t work: A woman on the street (Pascale Armand) “activates” like a sleeper agent in a Bourne movie, follows the correct red-mask onto the subway, initiates a brawl, snatches the case (by hacking off his hand) and vanishes. Since this matches up with other reports of an abnormally-skilled thief targeting diamonds in recent days, it falls on Team Coulson to investigate. I wonder what the line is between “hard to explain” and “must be supervillainy!” police in the Marvel Universe use to decide when to pass the ball to S.H.I.E.L.D., because it seems like the temptation to abuse that would be pretty extreme (“This unsolved is going nowhere fast.” “Ah, send it to S.H.I.E.L.D., tell `em we think TypeFace is back or something!”)

This time, at least, there’s a more substantive reason for this specific team to be involved: The suspect turns out to be Akelah Amador, a former S.H.I.E.L.D Agent presumed KIA who’d been personally trained by Coulson, who blames himself for whatever happened to her and intimates that he sees bringing Skye into the fold as a chance to get mentoring right this time. Her presence also sets up an interesting division on the team; with the by-the-book hardcases (Ward and May) wanting to take her down like any other traitor while the newbie/non-field operatives (Skye and Fitz/Simmons) want to give her the benefit of the doubt. As ever, Coulson seems to have his own angle.

The actual “what’s going on?” is somewhat straightforward: Agent Amador is being manipulated by some sinister offscreen handler via a camera/messaging-system/bomb implanted in her skull that’s feeding her data and allowing for the seemingly superhuman reflexes and X-Ray vision she employed in her robberies. The fun is in watching how the agents suss it all out and how much bigger and stranger the conspiracy seems to get. The moment where Fitz/Simmons and Skye hack into what they think is just a villain’s security cameras only to realize they’ve actually hacked their target’s eyeballs is what Agents of S.H.I.E.L.D. should be building most of its action around.

More refreshing, though, is that the situation with Amador herself has been mostly handled by the midpoint of the episode. We get exactly enough fun out of watching the good guys have to piece together clues based on whatever Akelah is looking at while they’re spying on her eye-feed, a brief x-ray enhanced fight scene with May and then she’s in custody – good! Instead of more protracted bad guy chasing, it’s time for more weird science, more spycraft and more character scenes; all the stuff that this show is good at but needs to do more of:

On the weird science side, Fitz/Simmons have to figure out how to remove the suspiciously-advanced implant from Amador’s eye. On the character side, Coulson “interrogates” his ex-protégé via what turns out to be more like a confessional. As for the spycraft, Skye and Ward attempt to ferret out the identity of Amador’s controller by swapping her eye-camera feed onto Ward and having him continue her mission… which hits a small but not insurmountable snag when one of the instructions for bypassing the guard to an underground vault in Belarus is “seduce him.”

My favorite bit, though, is that Amador’s final target turns out to be a tiny room, empty save for a chalkboard full equations covering three of the four walls and two unassuming men calmly working on old-fashioned typewriters. We never find out what these guys are working on, but it makes logical enough sense as establishing that whoever is in charge wants whatever this is to not even touch a digital access point; for now I’m digging just the simple “WTF?” of it – and not just because it’s our second indicator (after the red mask guys) that whoever penned this episode has an affinity for, if not Steranko-era S.H.I.E.L.D, at least their taste in spy fiction.

In any case, the mystery wraps without resolution as Amador’s handler turns out to have been controlled himself. A bigger, rival, evil organization to fight? If so, finally! More importantly, Akelah Amador makes it out minus one eye but otherwise on the other side of her situation. Some of her scenes felt a lot like try-outs to become a regular cast member, and if so I could really get behind that – though they’d have to figure out a way for her to function as something other than a spare Melinda May.

Speaking of Agent May, she gets the final dialogue exchange with Amador that gives us our mythology-tease for the week. During their earlier scene, Coulson had made reference to being a changed man since last she saw him, calling back to the earlier implication that he was a harder taskmaster when she knew him. She brings it up on her way to S.H.I.E.L.D custody. May explains (again) that he was “almost” killed during the events of The Avengers, but that doesn’t seem to be what Amador was talking about. She wants to know “what they did to him” – which would seem to imply that the Coulson she knew was somehow different from the way he appears here and the way we knew him from the previous Marvel movies… 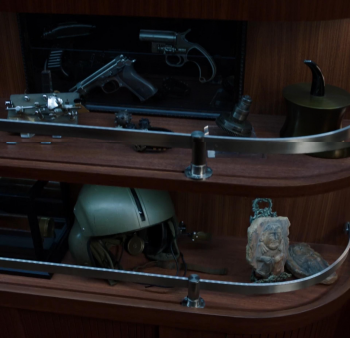 CRAZY FANBOY THEORY FOR THE WEEK:

So, then. The all-but inevitable appearance of an evil counterweight to S.H.I.E.L.D seems all but ready to rear its head. Who will it be? Well, assuming for a moment that they aren’t just going to make up a new one, here are the Marvel baddie outfits who might fit the bill.

HYDRA
You’ll remember these guys from “Captain America.” The show has already established that the organization survived both the “death” of The Red Skull and also the defeat of Nazi Germany, so it wouldn’t be a stretch for them to show up.

ADVANCED IDEA MECHANICS (A.I.M.)
In the comics, A.I.M. is the secret postwar incarnation of HYDRA. In the movieverse, they were Aldrich Killian’s outfit in “Iron Man 3,” but there’s no reason they couldn’t reconstitute – or have had a bigger handler all along (oh, please, please let Trevor Slattery do a cameo on this show!)

THE MAGGIA
The Marvel Universe version of The Mafia, basically. Believe it or not, there was a period when it was considered really poor taste to include the actual Mafia in what were still seen as kid-targeted stories, so Marvel had to call their mobster characters’ organization something else.

NATIONAL FORCE
Neo-fascist organization, run by Doctor Faustus. Minor S.H.I.E.L.D and Captain America enemies in the 70s, but came back as a big part of the “Death of Captain America” storyline in the early 2000s.

THE SECRET EMPIRE
Basically another HYDRA, but without a set-in-stone ideology. Also, they wear silly red full-body cloaks.

THE SERPENT SOCIETY
A vast and powerful organization of snake-nicknamed supercriminals, perennial enemies of Captain America and S.H.I.E.LD throughout the 1980s. No relation, believe it or not, to COBRA – even though Marvel was publishing the G.I. Joe books at the same time. Incidentally; these guys, HYDRA, A.I.M. and a few other groups are all actually part of one even bigger organization simply referred to as THEM and led by yet another time-displaced Nazi, Baron von Strucker.

“The Girl in The Flower Dress” will send The Agents to Asia to investigate a man with fire-generating powers. Kwan Zhao? or maybe Sunfire?

8 Most Exciting New Pokemon in X and Y