The following is a note from the developer, reprinted here in its entirety per their request:

Developer’s Note: Masochisia is an experimental take on psychological horror games as a narrative. Individuals struggling with depression, abuse or mental illness may be uncomfortable with some of the themes. The experience is intended for mature audiences.

In Jon Oldblood’s first video game, Masochisia, he provides an original take on scary stories that left me surprised and impressed. I hope he makes future games that expand on the universe he created here. The game’s shorter length, limited graphics options, and lack of extensive gameplay interaction hold it back a bit, but the unique story that unfolds is unforgettable.

You play as Hamilton, the son of an aging couple in the middle of the countryside. He’s an innocent lad that just wants to make his parents happy and proud of him. Your older brother Walter turns out to be a failure, so Hamilton really just wants to set things right in his family. The story turns dark when Hamilton meets an angel that wants him to deliver a message to his father. Beyond that supernatural addition, your mother is bipolar, and switches from loving you dearly to swearing that she’ll make your father beat in your skull. Your brother is a deranged maniac in a straight jacket. He loves to hurt himself and enjoyed the pain your father inflicted on him. Your father beats everyone because he hates the way his life turned out. You talk to yourself, and there’s a bear with antlers.

This game is not for the faint of heart, as it contains a few very graphic scenes and very intense moments of violence and gore. But much like the artistic landscape that accents Masochisia, every character in the game is distinct and memorable. 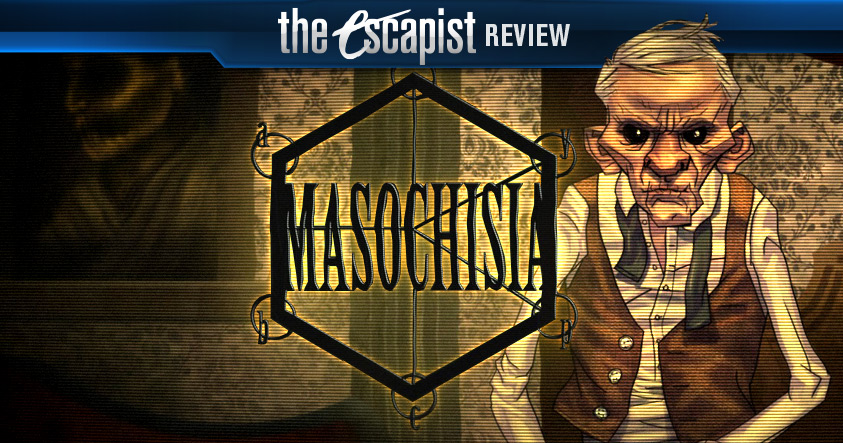 I won’t spoil the story here, as it’s the centerpiece of the Masochisia experience. Although somewhat short and playable in an hour or two, the events of the game are well paced and fairly easy to follow. Separated into six different acts, Masochisia was able to provide a few interesting plot twists and curveballs that I didn’t expect to happen. The ending of the game will catch most people off guard, and I applaud the cleverness of Oldblood’s choice to finish things as he did.

Replay value is possible, as there are different choices and paths to take that have an effect on the game’s outcome. There’s also hidden messages thrown about everywhere as well, for the most dedicated of code breakers to solve. The biggest changes the choices make are on the dialogue between characters and Hamilton’s self-perception.

Masochisia has very limited puzzles and problem solving moments, much the standard for point and click adventure games. There are one or two situations where you’ll have to think about how to proceed, but even then there’s not too much of a brain teaser. Some people will find this a plus, not wanting to be taken out of the rollercoaster of a story, but it left me wanting a bit more. Masochisia‘s art direction proves a great backdrop for puzzles and exploration, and I’m disappointed there wasn’t much interaction with it. At the very least, Oldblood could have hidden some collectible items in the detailed landscape to unlock extras or behind the scenes content.

As I mentioned, the storybook art really enhances the game’s atmosphere. The windmills and dreamy fields of the landscape make you feel comfortable. At the same time, the darkness and uneasiness of your broken down manor are just as strongly accented by the visual choice. The overall atmosphere is like a picturesque countryside tainted by something dark and twisted. Paintings of people hanging themselves, pictures of men and women corrupted by shadowy figures: these are the decorations of the Hamilton’s home. The rain hits the trees, the ticking of the clock in the parlor, the crackle of the warm fire. Those are some comfortable sounds. On the flip side there’s the sounds of your father whipping you with a belt, the snikt of a metal dagger puncturing skin, and the scraping of a bone saw as it cuts. Not so comfortable.

The contrast of being comfortable and uneasy from moment to moment is when the game has jump scares prepared. They’re not overdone, instead spread out at the exact moments where you forget to see them coming. Masochisia‘s developer put special attention in the atmosphere and sounds of the game.

The graphics settings do need work. There’s vertical sync, resolution, and the option to go fullscreen. But when I hit the “quality” menu the only option from the dropdown was, well, “good.” For a visually centric experience, I was surprised to see the lack of tweaking that was available from the backend. Fortunately, Masochisia isn’t a game that really demands intense graphics capabilities to enjoy it – but it would be nice to crank it up for a huge monitor. I had little to no slowdown at all in my playthrough of the game.

Masochisia is a refreshing change of pace for the point and click horror genre – Jon Oldblood created a very beautiful world of his own that can be at times intensely beautiful and bizzarrely twisted. His intent to create a “2D narrative horror” story can be considered a success. If Jon expands this world to other games, I hope he includes more puzzles and problem solving elements to it for the player to feel a sense of accomplishment. But the ending certainly proved to me that Jon Oldblood knows how to think outside the limits of what’s considered normal.

Recommendation: Fans of spooky stories and dark folklore will find a lot to love in Masochisia.